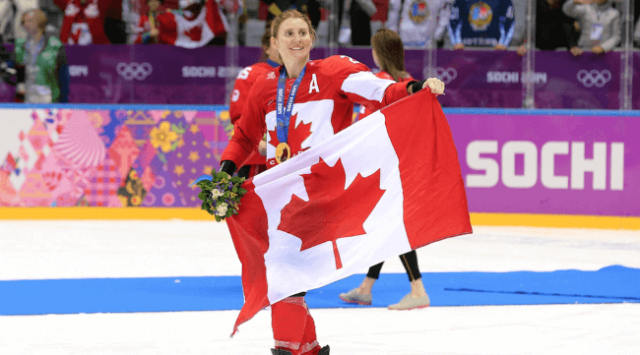 National Canadian Women’s Hockey team captain Hayley Wickenheiser is an Olympic force to be reckoned with. And this year she has much to celebrate because the 2010 Olympic gold medal winner has just been announced as the latest inductee in the 2019 Hockey Hall of Fame. 2019 also happens to be the very first year of eligibility for inclusion for Wickenheiser, making the inclusion all the more special.

Board chairman Lanny McDonald only recently informed Wickenheiser of her official inclusion. According to the hockey star, she was the time busy with mandatory service at a medical school at the University of Calgary. Just as soon as she had received the phone call from McDonald, her phone did not stop ringing. She recalls that the first person to have received a call back from her after the call from the chairman was the chairman himself. Obviously very delighted with the inclusion, Wickenheiser described the honour as the Holy Grail of personal accomplishments; outside of having won Olympic gold, of course.

Wickenheiser is the all time high-scorer on the women’s hockey team. She received a similar accolade a short while ago earlier this year when she was inducted in a similar fashion into the International Ice Hockey’s Hall of Fame.

The player recalls a time when there had been no girls’ teams for her to play on. This was roughly 3 decades ago. She tells the story of how fellow players and their parents had not always been happy about her having tucked her hair in under her helmet in order to pass as just another one of the team’s members.

Thankfully, a lot has changed since then.

The national captain says that the induction made her mind wonder to the times when women simply weren’t big in international sports, let alone hockey. She said that it had reminded her of all of the rough times that she had experienced many years ago in hockey, but that it also symbolised exactly how far the sport; how far the women in the sport; had come since those difficult and trying times.

Wickenheiser comes at a time when the player has much to celebrate in terms of her overall career. Not only did she win gold at the 2010 Olympic Games, but she had also been part of the national teams that had secured world titles in 2007 and also again in 2012.

Place YOUR BETS on Hockey and other sports online. Wager & WIN!