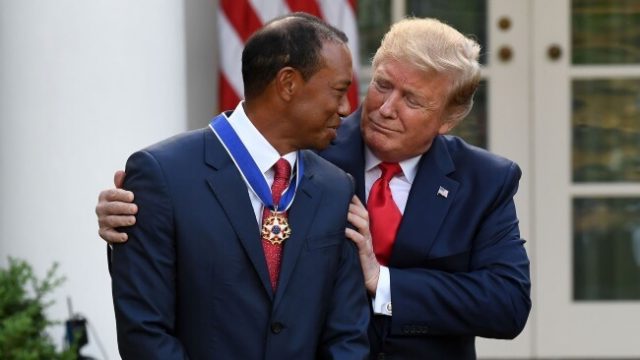 US President Donald J. Trump has bestowed upon pro-golfer Tiger Woods the Presidential Medal of Freedom. Trump awarded the nation’s top honour to Woods during a ceremony that took place in the Rose Garden of the White House. According to Trump, he deemed the golfer worthy of the award because of the incredible resilience and determination that enabled Woods to defy massive physical odds caused by injury. But despite the fact that most would agree that Woods did indeed do what few men in his disposition would have been able to do, many believe that the president’s motives have not exactly been noble or 100% above-board.

What Trump failed to mention during his speech of praise and pomp, was that Woods was in fact a long-time business associate of The Trump Organisation. He also failed to mention that he has been using the golfer’s celebrity-like status to attract clients to his properties for many years. One has only to remember how the masses had stormed the barricades of Trump’s Taj Mahal Casino in Atlantic City when Woods made a guest appearance on the red carpet on New Year’s Day 1997, a day after having won his very first Masters victory, to realise the value of the magic potion that is Woods to Trump and his lackeys.

Big On Woods And Big On Golf

Woods’ and Trump’s business endeavours have been a long time in full swing. Golfers who visit the president’s golf club in Doral in Florida have the option of staying over at the Tiger Woods Villa. Trump, a keen player himself, had also commissioned Woods to design an entire golf course in Dubai. The course is managed by The Trump Organisation.

Trump’s business interests have long been a thing of unease for the American public. Despite his having been advised to sell off his assets and deposit the money into a trust, he hasn’t at all bothered to mind official protocol. Instead of toning down, he merely appointed two of his sons in senior management positions, and secured all of his assets in trusts. He also appointed an ethics lawyer to take care of the vetting of ongoing and new business deals.

That people are now questioning Trump’s motives is perfectly understandable, says Christopher Devine, an associate professor of politics at the University of Dayton; however, when considering the entire matter without Trump in the picture, he believes that Woods deserves the award.

If Clinton or Osama had been the ones to bestow the award on Woods, reckons Devine, it would have been a matter of no questions asked.

strong>Claim your OWN rewards online. Sign up with a Canadian casino online NOW!