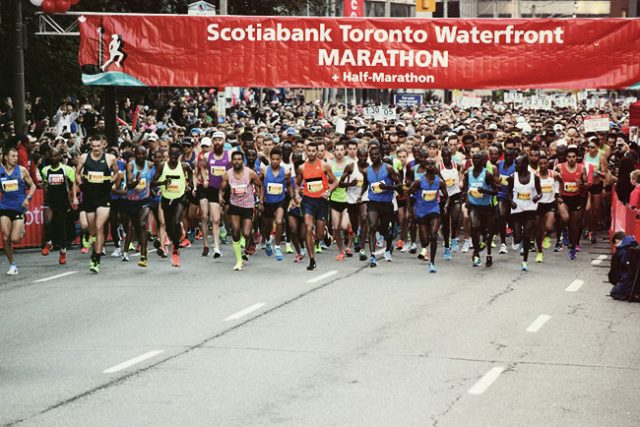 Cam Levins set a new record in his marathon debut, Benson Kipruto and Mimi Belete won the men’s and women’s races, personal bests were achieved, and some serious money was raised for charity. All of this went down at the 2018 Toronto Waterfront Marathon, held on Sunday, October 21.

The long-distance runner from Black Creek, BC, had a serious career upset in 2015. At that year’s Canadian Track and Field Championships in Edmonton, he was hit in the back. His subsequent fall to the ground tore his left foot’s peroneal tendon, as well as causing a number of stress fractures and other injuries.

He had surgery in 2016, and was out of action for some time. Coming off the high of a string of successes, including a trip to the 2012 Olympics and a bronze medal at the 2014 Commonwealth games, this must have been especially demoralizing.

But Levins has trained hard come back stronger, starting with some 5 km and 10 km races before moving on to Oregon’s Holiday Half Marathon in December 2017. Toronto was his first-ever marathon, and he finished fourth overall. He also shattered the Canadian men’s marathon record of 2:10:09, which had been set by Jerome Drayton at Japan’s Fukuoka Marathon in 1975.

He won CA$6,000 for the race, plus a bonus CA$43,000 for setting the new time – CA$1,000 for every year that Drayton’s record held. Even more than that, Levins seems to have regained his confidence. He said the race allowed him to take back his career, and added that he is eager to go to the Olympics again.

Several Canadians impressed at Sunday’s marathon. Kinsey Middleton was the country’s top woman runner, clocking in at 2:32:09. Leslie Sexton, last year’s Canadian Champion, and 2016 Olympian Krista DuChene ran times 2:36:03 and 2:36:46 respectively. Coming in seventh, ninth and tenth overall, the women were as impressive for their support of each other as for their athletic abilities.

First place in the men’s race went to Kenyan Benson Kipruto, who stopped the clock at 2:07:24. Elsewhere Ethiopian Mimi Belete, who represents Bahrain internationally, finished the women’s event in 2:22:29, winning the title, setting a new record and topping her own personal best time.

But perhaps the biggest heroes were the athletes who raised money for charity. Evan Latsky and Blaine Penny even broke Guinness World Records in the process. They became the fastest runners to compete in full hockey gear and dressed as a battery, respectively. As long as it generated some much-needed funds, they’re sure to feel it was worth it.