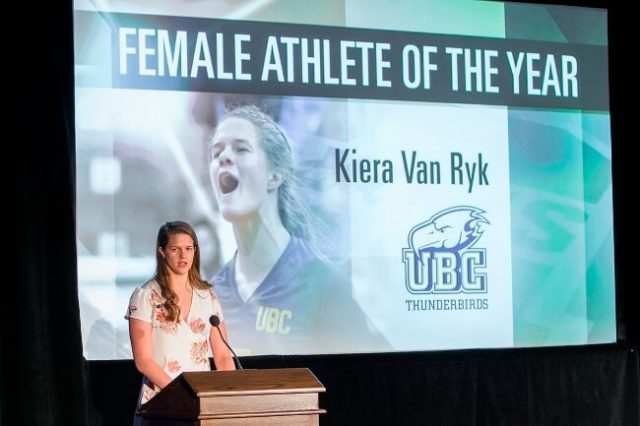 British Columbia University’s Kiera Van Ryk is a player who knows her way around the volleyball court. The Thunderbird has just been named the top Canadian female athlete in university sport. Van Ryk, who is originally from Surrey, B.C., was awarded the Jim Thompson Trophy; a trophy awarded to the best female athlete in university sport. Van Ryk was joined on the podium, at least in spirit, by Laval football player Mathieu Betts. Betts received the Doug Mitchell Trophy for best Canadian male university athlete. The awards form part of the Lieutenant Governor Athletics Awards and are hosted each year in Calgary. Betts wasn’t able to attend the awards in person as he was at the time still away in Chicago with his new NFL team.

Van Ryk is now officially the third Thunderbird in less than a decade to have been honoured with the coveted award. Both Van Ryk and Betts also received post-graduate scholarships valued at $10,000 each.

What makes especially Van Ryk’s achievement all the more special on a personal level is the fact that the Jim Thompson Trophy is generally awarded to fourth- and fifth-year athletes. This has been the norm all throughout the 27-year history of the iconic awards. Van Ryk, it seems, really breaks the mould, being only in her second season with the Thunderbirds.

By having secured the award, Van Ryk joins fellow T-birds and UBC volleyball stars Liz Cordonier (2010) and Shanice Marcelle (2013) in the top university sports Thunderbird league of the current decade. It should however not come as any surprise. Van Ryk did after all establish a new Canada West Conference record when she achieved a landmark average of 0.77 service aces per set. Not to mention her 24 kills, 3 aces and 13 digs in the championship finals against Ryerson.

Needless to say, the Thunderbirds had the last laugh.

But Van Ryk wasn’t willing to receive the credit in a sole capacity. She stressed the fact that her stellar development and achievements are largely thanks to coach Dough Reimer. Reimer has been coaching the Thunderbirds for the past 22 years and according to Van Ryk, is a man well capable of challenging an athlete in way that truly inspires not only wanting to be a better athlete, but also a better person in general.

Without a doubt just about the best honours to be bestowed upon any coach by far.

Bet on the BEST athletes online. Sign up at a Canadian sportsbook!