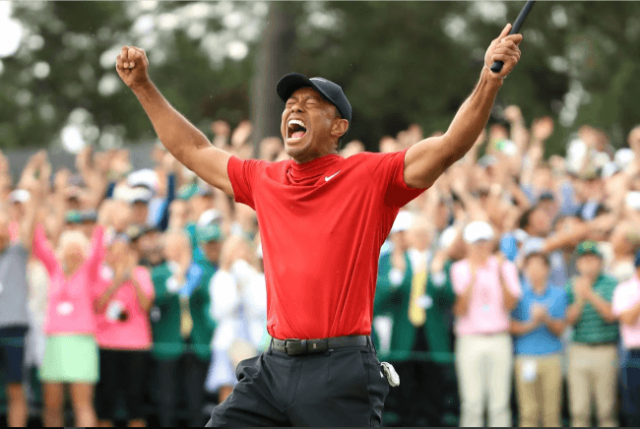 On Sunday last week, Tiger Woods won more than his fifth Masters. He reclaimed his right to dream of bigger things and he showed the world that he was more than just a disgraced divorcee acting out by driving around high on prescription pain medication. Granted, slipping the green over his shoulders was without a doubt a momentous occasion for Woods for the sheer value of what the jacket represents. There was nothing average about the scope of his comeback either; 2 under 70 and a single-shot victory.

But perhaps the greatest victory of all is this time of a much more personal nature. This is after all the same Tiger Woods who remembers having just a few years back, after numerous back-surgeries, struggled to sit, walk or even lie down. Let alone reclaim his mighty swing. It was so bad, in fact, that by his own admission, Woods became convinced that he would never play again.

Destiny obviously had some plans of her own.

Headed Towards The Big 18

Sunday’s Masters is Woods’ 15th major victory. He is now officially only 3 short of the 18-bar set by Jack Nicklaus. It must have been a pretty special treat for Woods when Nicklaus tweeted his congratulations for a game well played. Brooks Koepka, one of Sunday’s champions who had managed to make it into the final two groups, described Woods’ comeback as one of the greatest that he had ever witnessed.

Besides being one of Woods’ greatest supporters, Koepka is also of the firm opinion that breaking through the Nicklaus threshold is closer than what many people think. 18, said Koepka, is a definitely possibility.

Despite Woods’ late return to major golf, one cannot help but agree with Koepka. Tiger Woods is after all, and ironically enough the oldest player next to Nicklaus to have won the Masters. But at 43, he has achieved more than what most younger players can even dream of doing.

It Was Worth It

As for Koepka, what does it feel like to have progressed so far in the Masters only to lose to a player who has had to make do with 13 years without a win? The only thing that really matters, according to Koepka, is that against a player like Tiger Woods, you walk away knowing that you’ve given it everything you’ve got.

Woods certainly managed to make a 13-year drought worth the wait.

Do YOU love Golf? Bet on your favourite sport ONLINE!