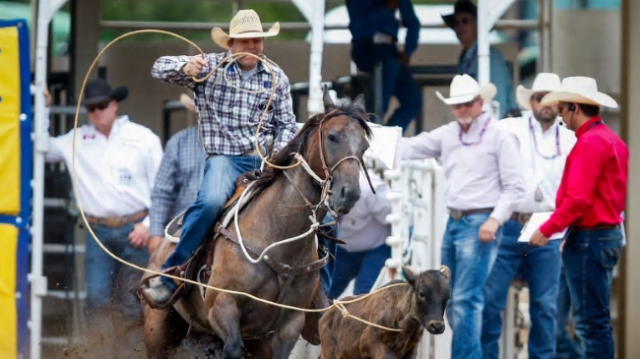 Rodeo roping champion Caleb Smidt is a man among champions following his recent performance at the Calgary stampede rodeo. Smidt positively owned Showdown Sunday when he stuck it to not one, not two, but three former champions and went home with the $100,000 prize money thanks to his impressive performance.

Smidt described the experience as awesome and said that the feeling of being in the moment and competing for $100,000 in prize money was really hard to beat. Awesome most definitely is the word that comes to mind when considering that the Texas native successfully edged 2010 Stampede champion Matt Shiozawa out of his chance to lay claim to the win thanks to Smidt’s 3/10ths of a second win.

Smidt credited some of his good fortune to having had been lucky enough to go last. He described it has having seen what he was up against and therefore knowing exactly what he had to beat. Getting out there, being fast, and doing your job, said the Texas man, was really all that there was to it. Everyone competing in the competition knew how to rope; the secret was to rope better and faster than anyone else.

Sunday’s finals represented the last men standing following a process of elimination. Six events were hosted in total during the run-up, and 10 participants from each event made it through to the initial Sunday go-round. The go-round is the big discerner and only the top 4 competitors get to advance beyond the go-round and onwards towards the finals.

Strong City’s Sage Kimzey has much to smile about also. Kimzey won his third bull riding title during the recent event, thanks to his stellar ride upon Night Moves. He was awarded 92.5 points for his bull-riding expertise.

Kimzey is no stranger to the win and won his first top title back in 2015 in Calgary. He added his second title soon after when he also rode his way all the way to victory on the very same Night Moves. Kimzey said after his impressive performance that he had been happy to have Night Moves “by his name” as it was always a buck and a hard move whenever Night Moves came to Sunday Showdown.

Want to put money on the horses? Bet ONLINE and WIN!