Sports Team Play Where They Can Make the Most Money 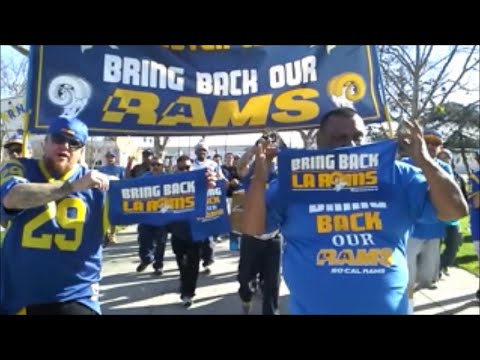 The St. Louis Rams announced that they are moving "back" to Los Angeles. The odyssey of the "Rams" organization is bizarre, to say the least. The Rams began in the 1930's as the Cleveland Rams.

After a prolonged battle with the NFL, the Cleveland Rams were allowed to move to Los Angeles in 1946 where they were to play in the Los Angeles Coliseum with seating for over 100,000 fans.

In 1972 Robert Irsay bought the Rams. He and Carroll Rosenbloom, owner of the Baltimore Colts, pulled off one of the most bizarre trades in the history of professional sports when they traded franchises! The same Robert Irsay became famous in a most unsavory way when he moved the Colts to Indianapolis under cover of night in 1984.

The Rams had on-and-off success after the franchise trade but had problems getting television exposure because of an NFL rule forcing a blackout of all NFL games that were not sold out 72 hours before kickoff. As the Rams played in a very large stadium with seating capacity in the 90,000 range, most of the Rams home games were blacked out for many years.

At Halftime Play at 888 Sports

Moving Down the Street

The Rams moved to Anaheim Stadium which seated "only" 69,000 and were able to sell out their home games. Then competition for the sports dollar in Southern California became even fiercer than it had been because other Southern California teams were winning championships and the Rams had entered a long dry spell. The Rams became the least popular professional sports franchise in the Los Angeles area.

It was inevitable that the Rams would look for a venue where they would be popular once again.

St. Louis is a metropolis of about 1,000,000 people. In 1960 the unloved Chicago Cardinals relocated to St. Louis and became the beloved St. Louis Cardinals.

Football Socialism but not Quite

NFL teams have a profit sharing scheme that makes it possible for small cities such as Green Bay to compete with New York, Los Angeles, Chicago and the other giants.

But the profit sharing scheme doesn't include income from such amenities as sky boxes. So teams either get the cities they are in to build new stadiums, or to remodel the existing stadium to accommodate the high-end clients, or the teams move.

The Baltimore Colts snuck out of Baltimore at night and moved to Indianapolis, the Cleveland Browns moved to Baltimore, the Houston Oilers moved to Memphis and then to Nashville, the Oakland Raiders moved to Los Angeles and a few years later moved back to Oakland, and both the New York Giants and the New York Jets play in New Jersey.

Most of the stadiums in use in the NFL were built in the past 20 years; many in the past ten years.

The reason I was moved to write about the Rams' odyssey was because the NFL is perfectly situated to have a broad revenue sharing plan whereas baseball, basketball, and hockey aren't. The NFL plays a sixteen game season. Almost all games are sold out. Fans who can't get tickets can still watch on television because the television contracts with the networks that broadcast NFL games stipulate that all games must be televised.

The NHL and NBA have 82-game seasons and MLB has 162-game seasons. Few home games are sold out. No national network would agree to televise every game which would include early-season games where fans are more interested in the basketball and hockey playoffs and late-season games with few fans in the stadium and fan interest on the wane as the NFL season has just begun.

With television, souvenirs, merchandise, and ticket sales all shared the only thing left is sky box revenue which can be very lucrative. Many cities have built new stadiums in order to keep their teams. The new stadiums were built with specialty ticket sales in mind, sky boxes.

So the greatest show on turf, as the St. Louis Rams were called during the Kurt Warner glory years, are moving to Southern California where they can sell sky boxes for millions of dollars per year.

When citizens of many U.S. cities feel compelled to spend public money to support their enormously wealthy football teams they may momentarily come to realize just how cut-throat the business of football really is.

Taxes are Never Too High, Sayeth the Mayor, and the Governor

These days anyone who lives in a large city has to be ready to be taxed to support local professional sports teams. The competition for franchises is fierce. If one city balks at paying for a new stadium, off the team goes to greener pastures.

I wonder how many of the 8,000,000 people who live in the Chicago Metropolitan Area are aware that a percentage of every Chicago Bears merchandise item they buy contributes to keeping their hated rival, the Green Bay Packers, in the league.