The Canucks Celebrate 17 Seasons Of Sedin 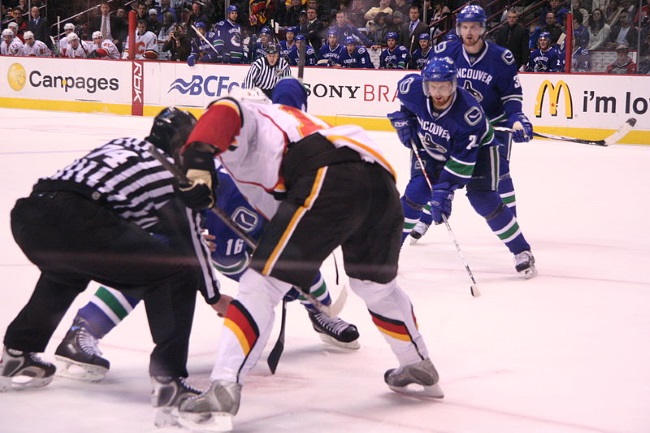 Their unique chemistry was more often than not after a time lost on all who cheered them on. The fact that they were brothers playing for the same NHL team initially seemed to border on the miraculous, but this too soon enough become just another thing accepted as “it is what it is”. And after 17 seasons playing for the Vancouver Canucks, it stands to reason that brothers Daniel and Henrik Sedin will have become part of the furniture. So much so that they now have their names hanging from the rafters at Rogers Arena.

We may have grown accustomed to seeing the Sedins do their thing on the ice but last year’s announcement that Vancouver’s star forwards will be retiring at the end of the current NHL season basically prodded us back to reality. What would a Canucks team even look like without the uncanny synchronised magic that is Sedin? Wednesday’s celebratory retirement of Daniel’s No. 22 and Henrik’s No. 33 wasn’t only the highlight of 50 years of Canucks history remembered; it also served as a reminder of what the Swedish NHL force represented to the club and franchise.

To say that the Sedins were (and still are) respected beyond measure is a gross understatement. And this was blatantly obvious by the smash of high-profile NHL personalities in attendance during Wednesday’s retirement ceremony. NHL Commissioner Gary Bettman, Deputy NHL Commissioner Bill Daly, club owners Francesco and Paolo Aquilini; these are just some of the names who pitched up for the sole purpose of celebrating the brothers’ stellar Canucks careers.

The big names were joined by the even bigger names in the Sedin equation. The high-profile NHL elite were joined by the brothers’ parents, children, their wives and their older brothers. And that’s not mentioning yet their former team-mates and managers past as well as present.

B.C. Was Home To Them

But the twins did not only shine on the ice. In fact, what they did when away from the club was perhaps even more notable. A definite highlight was their 2010 CA$1.5 million donation that helped build a new children’s hospital in B.C.

British Columbia was home to the Sedins, after all. Henrik summed it all up rather nicely when upon commenting on the honour of having their jerseys retired in such a memorable manner, he spoke of the very first day he and brother Daniel joined the club.

To the Sedin brothers, it felt like home from Day 1.

Be a WINNER betting on the NHL! Sign up at a Canadian sportsbook NOW.