How Seabin Makes For A Clean Toronto Marina 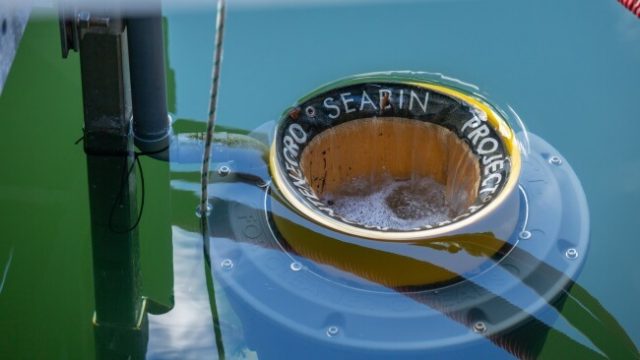 Low-cost floating garbage cans may seem too simple and good a solution to be true, but considering the fact that Toronto’s Outer Harbour Marina is now visibly cleaner than ever before, the proof appears to be in the pudding after all.

The innovation; still currently in its experimental phase, is named Seabin and its been quite successful of ridding the marina of everything from plastic water bottles to discarded throw-away coffee cups and cigarette butts. The floating garbage bins are cylindrical containers that are mounted to the side of the marina’s dock. The bins act as garbage traps and are able to suck into their bellies everything from plastics to oil spills. Even micro-plastic is no match for Seabin.

Read More… How Seabin Makes For A Clean Toronto Marina

Seabin Is Cheap And Effective

The bins, now totalling three in number, are positioned below the surface of the water, and are each connected to a specialised pump at the bottom-side of the bin. The pump continuously moves up and down, drawing any debris present in the water into the container for storage and later removal.

Toronto’s marina is one of the first water bodies to benefit from the experimental project. Previously, points out Outer Harbour Marina manager Mike Dwyer, it used to be a case of having to manually collect the trash from the marina’s water; process that required manual human resources and money. Also, collecting micro-plastics and the remnants of oil and gas spills were near impossible when relying on a manual sweep. Nowadays, said Dwyer, thanks to the installation of the Seabin prototype, it’s become a cost-effective and simple process of simple and routine upkeep.

The Brains Behind The Outfit

Seabin was invented by two Australian surfers who came up with the idea thanks to their having grown fed up with being confronted with loads of garbage free-floating in the ocean. Not only did they come up with a workable and effective prototype, but they also managed to raise roughly $350,000 thanks to an Indiegogo crowd-funding initiative.

A commercial version of Seabin is currently being developed thanks to the pair having approached W Products and Solutions with a partnership offer. According to W Products and Solutions sales manager Gautier Peers, a typical Seabin is able to collect around about 3.8 kilograms of trash every single day. That equates to a single Seabin potentially being in a position to rid the world’s shorelines of roughly 1.4 tonnes of garbage and debris every year.

Bet on sport and SO much more online. Wager and WIN today!