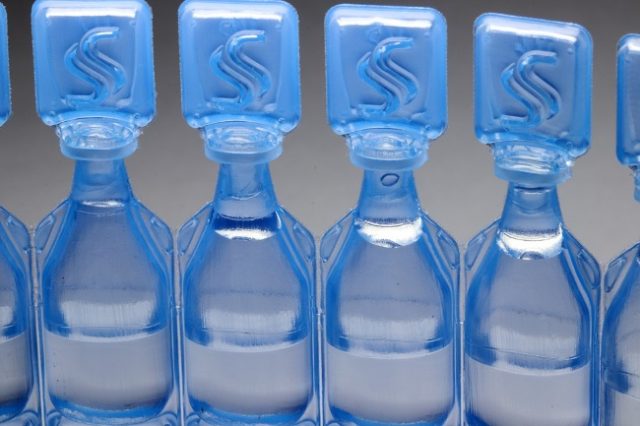 Waste not, want not. There’s been an increase in “no waste” awareness all over the world, but it generally relates to either not wasting water or food. But there’s another valuable resource that goes to waste literally daily, albeit not a natural one: eye drops. Most of us know the feeling; certainly anyone who has ever used eye drops knows the feeling of trying to hold and squeeze the bottle in such a manner that the correct volume is dispensed in terms of what is needed in each eye. And yet, it seldom works out that way and we generally end up with a lot of the fluid running down our cheeks.

Its not a case of not being “expert enough”, says New Brunswick ophthalmologist Dr. Nir Shoham-Hazon. Squeezing the bottle just a tad too hard will dispense more than one drop, and even to the real eye experts, this is tricky business.

Even if you’re one of the rare few to have gone through the painful exercise of watching the many YouTube instructional videos on how to use the lower eyelid as a type of pocket when releasing the eyedrop, you will know that its still not possible to “use” the entire drop that is released into the eye. This is because the human eye has the capacity to only hold about seven to nine microliters of fluid. Standard eye drops; both commercial and prescription; dispense closer to forty microliters of fluid in one go. It’s not possible to reduce the volume, as this is the metred volume that is released in a single drop.

If you’re under the impression that this is new news, or news to pharmaceutical companies at all, then you’re wrong because many a lawsuit has been instituted against the big guns like Pfizer, Valeant, Allergan and Merck by consumers who have claimed that they were left no choice but to pay for something that they weren’t able to use thanks to the very design of the product’s container. The fact that information was leaked about how Allergan specifically, had experimented with a smaller dispenser but had canned the patent because of financial reasons, didn’t at all sit well with the general public.

Young Scientists To The Rescue

When Alissa Song, a 26-year old medical student at the University of Washington in the US, learnt of the supposed unwillingness on the part of big pharma companies to budge on the issue of volume she decided that there simply had to be a better approach to the issue of wasted eye drops. And so Song, together with three of her friends, all with either biomedical or engineering backgrounds and training, came up with a simple and effective solution in the way of a plastic adaptor that screws onto the tip of the dispenser and effectively forces the dispenser to release a much smaller drop; a 9.4 microliter drop, to be exact.

When considering that Song and her team have effectively come up with a solution; cleverly dubbed the Nanodropper; that extends the usage of a bottle of eye drops from one month’s worth to three month’s worth, it becomes glaringly apparent why pharmaceutical companies are in gross violation of US consumer laws.

Best of all is that the Nanodropper may be available for purchase in Canada soon. Now officially licensed by the FDA, there’s no stopping the Nanodropper. And according to Song, Canada is the country being eyed next for distribution and sales. This may prove to be real tearjerker to big pharma companies, but it’s going to save Canadian consumers a whole lot of money.