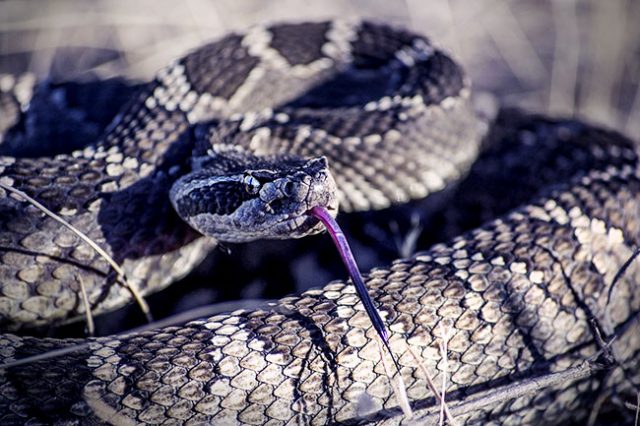 The rattlesnake population of British Columbia is dwindling, and now scientists and conservationists are working to change that. Working with the province’s transportation department, they are building subterranean passageways, which will run under roads, for the reptiles.

These creatures are a food source for birds of prey and other animals, and are vital for rodent population control. Being able to crawl into hard-to-reach spaces means they are able to get to the rodents when it is otherwise impossible. As an important link in the local food chain, their survival is important for ecology.

Focusing on a Single Populations

So far, government and university researchers have directed all their attention to one western rattlesnake population. This colony lives in a basin in the South Okanagan Valley, which has not seen much development and is fairly pristine.

Even in this favorable environment, these creatures are threatened. Professor Karl Larsen of Thomson Rivers University’s Natural Resource Science Department explains that the females can’t reproduce every year. This is due to the region’s short summers and long winters.

Larsen said that when a high vehicular death rate is added, it spells a “recipe for disaster” for the snakes. While the average 2-lane road in this area only sees about 350 cars and trucks per day, these vehicles are causing their numbers to drop by 6% to 7% a year. This is especially bad news in light of the fact that there are only about 2,500 of the reptiles in the area – they are actually facing extinction within the next 100 years, according to Larsen.

The team that is building the passageways will monitor how often the snakes use them. If they prove effective and the death rate is lowered here, the conservation efforts could be rolled out to the rest of British Columbia.

Research scientist Christine Bishop, who is based at Environment and Climate Change Canada, said that some people run over the snakes on purpose. There are many occasions when drivers don’t see them, but they have been killed on purpose several times.

People have a natural fear of these creatures, Bishop added, and think they are doing something good by killing them. She said that snakes are actually shy and much more likely to kill rodents than people, but she does understand the phobia. That’s why it is so important, the researchers feel, to work on rehabilitating the reptiles’ image at the same time as they work on the underground tunnels.