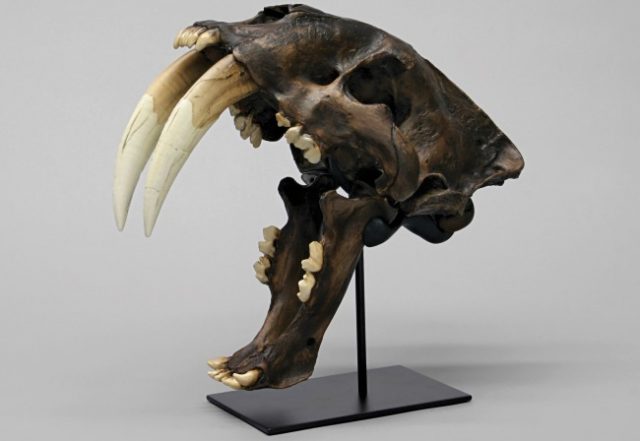 A recent find by young scientists associated with the University of Toronto and the Royal Ontario Museum indicates the existence of a very special pre-historic cat in the region residents of Alberta now call home. The enigma that is the sabre-toothed cat has captivated the minds of those interested in now-extinct animals that once roamed the earth for decades and the latest evidence seems to indicate that the feline predators lived and walked much further North that what was previously assumed.

The results of the study performed by the graduate scientists were recently published in the Canadian Journal of Earth Sciences and include details of not one but four prehistoric cats now thought to have lived in Southern Alberta’s Medicine Hat area.

In addition to the sabre-toothed cat or tiger, commonly recognised by its elongated fangs lodged in the upper jaw, the researchers also found evidence of and documented three other cats thought to have lived in the area. These are the lynx (or common bobcat), the American lion and the cave lion.

All four of the mentioned cats are assumed to have grown extinct some 11,000 years ago and so evidence has been particularly far and between, making the discovery of a bone thought to be one of the cat’s forepaws all the more exciting. But the truly amazing bit about the recent discovery is that the bone wasn’t found in some remote location but was discovered quite by accident by graduate student and co-author of the study, Ashley Reynolds, in a drawer containing previous collections unearthed during the course of unrelated projects.

Under Their Noses All Along

According to Reynolds, the bag containing the bone had been labeled “Smilodon” and had been in the museum’s possession since the 1960s. Something didn’t seem right to Reynolds, who immediately recognised the contents of the bag as being connected to the more common description of sable-toothed tiger. Reynolds then approached her collections manager and research supervisor, which ultimately led to the bone being analysed again and identified as indeed belonging to the fabled prehistoric cat.

The real value of the discovery lies in the fact that all indications now point towards the fact that the big cat once roamed the plains of Alberta as opposed to the previous assumption that the animal only travelled as far North as Idaho, which is located some 1,000 kilometres to the South of Medicine Hat.

Love the thrill of CASINO games? Canada’s TOP online casinos are waiting for YOU!