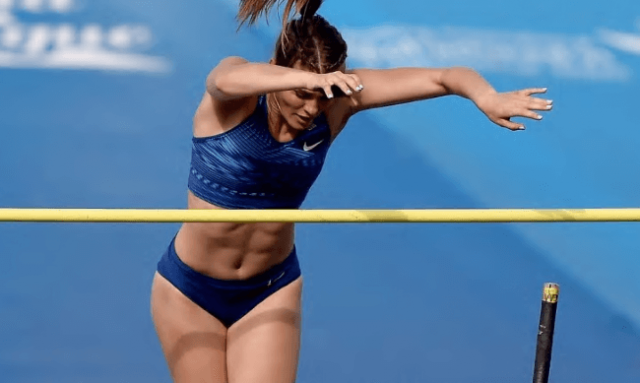 Canadian track and field world champion and pole jump record holder Alysha Newman has bettered her own record – again. Newman for the second time in two months improved her own previous best when she cleared 4.77 metres in the pole vault event at the Stabhochsprung Jockgrim athletics meet in Germany. She shared the podium with second and third place winners Holly Bradshaw (Britain) and Xu Huiquin (China), both of whom only managed to clear the 4.70 metre mark.

Newman the previous time round beat her own Commonwealth Games winning clear of 4.75 metres (March 2018) when she cleared 4.76 metres at the Guelph-based Speed River Inferno meet that took place on June 8.

A Champion Inside And Out

Newman enjoyed a particularly strong season indoors, and one that saw her do her vault magic inside of house by clearing a very clean 4.71 metres. The pole vault Canadian super star has been improving steadily at every meet since the 2018 Commonwealth Games and to say that for Alysha Newman the sky is the limit, has never been a more appropriate use of the old adage.

But that’s not to say that the track and field champion, who is a London (Ontario) native, hasn’t had to face her own set of personal challenges. Newman was forced to sit out for going on an entire season when she tore the patellar tendon in one of her knees at the Australian Games. Never one to take on a challenge lying down, the pole vault record smasher is back better and stronger than before and ready and able to take on the next attempt at a new record.

The Hope Is On Tokyo Gold

Her strong recovery is obviously very good news for the Canadian national track and field team as they will soon be headed for Doha, Qatar, to compete in the 2019 world championships. The event kicks off on September 28th. This may appear to be a while into the future yet but in terms of recovery time and athletic conditioning, its in reality just around the corner.

The 25-year-old will after that move on to Tokyo for the 2020 Olympic Games where she will, if all goes well and she manages to continue on the current trajectory of record-defying performances, she will be strong in the running for bringing home the gold.

Bet on the BIGGEST sports events online. Sign up at a Canadian sportsbook!