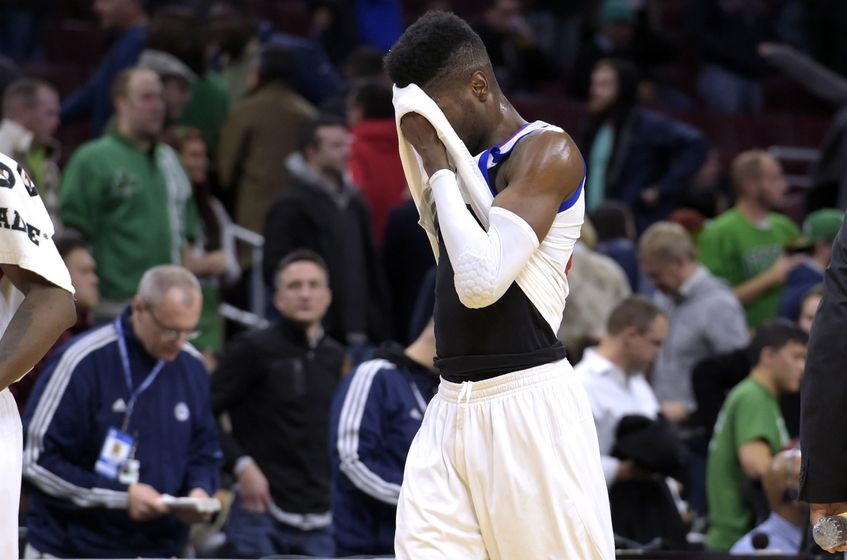 The 76ers have played 49 players since Sam Hinkie took over as GM in 2013. Sam Hinkie is better known as Sam Hankie because since he took over 76er fans have only had what to cry about. For beginners, the 76ers are paying JaVale McGee and Gerald Wallace a combined 29.9 million dollars not to play!

Management has adopted a strategy of accepting extreme mediocrity, historical mediocrity, in return for future excellence. This is a deep lesson in the fundamental reality of rebuilding. A team in any professional team sport that tears down the old incompetent structure and begins the arduous task of rebuilding must expect to be simply terrible at first before talent and luck overtake mediocrity and the team becomes first respectable and then of contending caliber. The Los Angeles Clippers, for example, were never willing to go the distance in tearing down the old. As a result, they were bad to terrible for a generation. The Knicks rebuilding processes under Isiah Thomas followed the exact opposite formula: trading the future as represented by draft picks for a mediocre present. Even as recently as two winters ago, the Knicks offered a ridiculously large package to Carmelo Anthony, a great player past his prime who is temperamentally unable to be the leader the Knicks need during their rebuilding process.

Unfortunately, the 76ers seem to lack patience and have traded away parts of their rebuilding process for future parts of the same process!

A Wealth of Unknowns

The 76ers now own as many as five first round picks next season, a future first rounder, and a number of second round picks stretching into the next decade. If the 76ers draft with a team concept in mind rather than an individual superstar concept, they will be much better next year and thereafter than they are this year.

Now they need a teaching coach who can meld high-end talent into a team with the overall talent enough to win a championship. Can anyone say Steve Kerr? I talked about what Steve Kerr accomplished with the Warriors last year: a first year coach with a team of highly talented players who were last in the league in assists the year before. Having so few assists indicated that the Warriors were a me-first, team-distant-last group of individuals. Kerr was able to convince the players that they could win with the reverse philosophy: team first, me a distant second. The Warriors won the championship last year and have yet to lose this year.

The Cubs improved from 73 wins in 2014 to 97 wins in 2015. Much has been made of the large number of breakout rookies, second year players, and young veterans the Cubs have but a lot of the credit must also go to the coaching staff and especially to Manager Joe Maddon. He successfully changed the attitude in the clubhouse to one of supporting each other, never giving up, and improving every day. The Cubs were 18 games under 500 last year, 44-37 in the first half this year, and 53-28 in the second half. Such a turnaround from one season to another and from one half to another cannot be attributed to players' talent alone.

Perhaps the epitome of the teaching coach is Gregg Popovich of san Antonio whose teams are always competitive even when they're in transition.

How Far Away are the 76ers?

The 76ers have a very long way to go. The experiment of hoarding draft picks could skyrocket the 76ers to contender status quickly or fall so flat on its face that it takes a decade to right the ship. At present only injured Carl Landry has more than two years of NBA experience. The Cubs improved tremendously with a roster full of inexperienced players but many players on the 76ers would be no better than average in Europe! When the first and second round draft picks come to Philadelphia, most of the present squad will be gone: young players in their early to mid-twenties, really good basketball players but not nearly good enough for the NBA.

Let's look at the bright side. The 76ers are not losing in the same way the Warriors are winning, that is, by 15 or more points per game. Although the 76ers do get blown out by better teams, many 76er losses are by two, three, or four possessions. Teams that lose close games are teams that fail to do the little things that win close games: make a fourth pass for an open shot, dive for a loose ball, box out on the defensive boards, exercise self-control by not taking a poor shot and holding the ball for a teammate to get a better look.

As I prepare this article for publication, I am watching the 76ers lose by over 50 points to Popovich's Spurs who are playing without Tim Duncan, Manu Ginobili, and Kawhi Leonard. As close as some 76ers' games have been against mid-tier or bottom-tier teams, the 76ers are clearly far, far behind a top-tier team that is executing well.

A teaching coach and staff would change the team's ethos which would lead to many more wins. Present coach Brett Brown was an assistant in San Antonio under Popovich but doesn't seem to have acquired the same touch that his mentor possesses.

The "Franchise" Has Issues

Self-control seems to be an off-court factor for the 76ers as well. Last year's first round pick and third overall was the massively talented, 19 year old, Jahlil Okafor. Some players are already mature enough to enter the league whilst still in their teens. Some players, no matter at what age they're drafted, are never mature enough to use their enormous physical talents. It's still far from sure which player Okafor will be but his several "interactions" with police do not bode well.

A lot of young people, athletes, Wall Street types, heirs, children of celebrities cannot handle sudden wealth when they reach 21 or so. Jahlil Okafor is only 19! To his credit Okafor recently tweeted, "I own my choices personally and now publicly." This was taken as an act of contrition; I certainly hope so!

I wonder if the 76ers top management and ownership team are ready to own their choices.

SHARE
Facebook
Twitter
Previous article No Losses and No Wins
Next article Believe it or not: Football, Basketball, Hockey and Baseball are not the Only Sports in North America
Related Articles