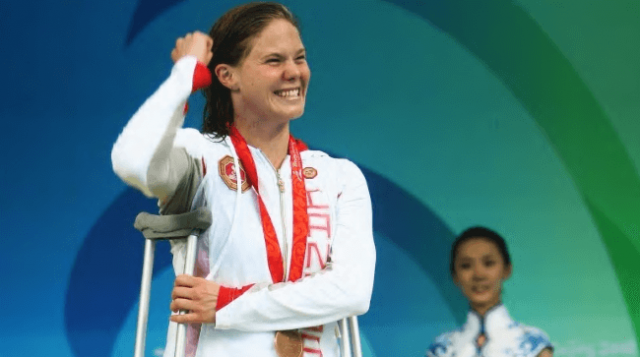 19-time Paralympic medallist Stephanie Dixon has been named Canada’s chef de mission at the Paralympic Games for the next two years. Dixon will lead Canada into the 2019 Parapan American Games in Lima, Peru, as well as into the 2020 Tokyo Paralympic Games. The Canadian Paralympic Committee made the announcement last week.

Dixon; winner of 19 Paralympic medals, of which 7 were gold; was born without a right leg and hip. She started taking swimming lessons when she was only two. By the time she had reached the age of 13, she was competing against able-bodied athletes and at 14 she enjoyed the honour of having been included in Canada’s national swimming team for disabled athletes.

Dixon eventually qualified for the Paralympic Games at age 16. At the time, she managed to secure 5 gold medals; 3 of which also qualified as new world-record times.

Read More… Sports Betting On The Verge Of Regulation

A Big Deal For The Champ

Being selected as chef de mission is a big deal to her, said Dixon. The gold medallist said that she could not be more excited about the journey because seeing to it that Canadian athletes had everything that they needed going into the games, in order for them to deliver the performance of a lifetime whilst also enjoying the experience, ranked very high on her own priority list.

Dixon also expressed some sentiments around the country’s involvement in the personal journeys undertaken by the athletes. She said that this was just about the best part of having been selected as their Paralympic representative; being able to represent the athletes to the general public by being their biggest cheerleader.

Support For All Athletes

Dixon, 35, is a life-long advocate for full inclusion in sports. Not only did she spend many years swimming at national level, but she’s also coached many others so that they too, may one day reach their full potential.

Her chef de mission duties will involve serving on the leadership team in order to provide the best possible support to the athletes, as well as promoting the Paralymic team as their official spokesperson.

Canadian Paralymic Committee President Marc-Andre Fabian describes Dixon as a true advocate of Paralympic sport, bringing a certain energy and insight to the role of chef de mission; in addition to her vast experience and insight into the sports world in general.

Bet on sport online! Canada’s top rated sportsbooks are waiting for YOU.