The Oilers May Find A Saviour In Ken Holland 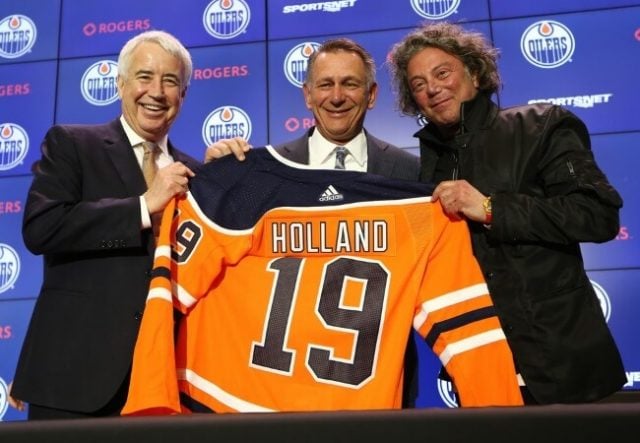 Money talks. And $25 million in the bank is enough to more than just budge the immovable object. Or at least it is in Edmonton-Oilers-valley. But then again, moving from a pretty cushiony job onto a rock-hard Oilers tough-seat isn’t exactly the kind of challenge that comes cheap, especially not if the task at hand will require nothing short of an NHL miracle. And so on May 7 began 5 years of either hell or Shangri la-style general management bliss for Ken Holland and the Oilers, depending on what Holland decides to do next. Undoing 45 months’ worth of Peter Chiarelli is no walk in the park, after all.

Holland was literally coaxed on over by Oilers owner Darrel Katz and Oilers CEO Bog Nicholson. Holland was obviously perfectly content in his advisory role with the Detroit Red Wings. But then again, money was in all likelihood not the only consideration on the 63-year old Ken Holland’s mind. After all, who would willingly offer up the opportunity to literally go out guns a’ blazing? That’s if Holland manages to pull the NHL bunny from the hat, that is.

Fast-forward 3 months and its time for a customary initial stock-take. What exactly has Ken Holland changed and what has he decided to leave be? One of the more significant changes has without doubt been the appointment of Dave Tippett (57) as head coach.

But on the flip side of the coin, that was 2012, and this is 2019. Following his 2012 success he hardly managed to keep head above water for the next 5 years. He then disappeared off the radar and as it stands now, he hasn’t coached an NFL team since the end of the 2016-17 regular season. In NFL years, this isn’t all that different to dog years. And so we’ll have to wait and see.

But Tippett’s history aside, whether or not the Oilers will taste sweet success will depend on their defense. Tippett should prove to be particularly handy in this regard, being defense-focused himself. And so perhaps it’s worth a shot affording both Tippett and Holland the benefit of the doubt.

Want to bet on the NHL? Back YOUR favourites online and WIN!