No Losses and No Wins 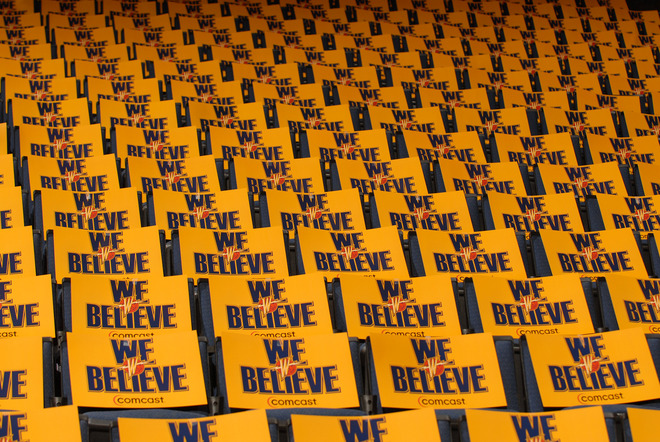 OAKLAND - MARCH 3: In Arena before the Golden State Warriors host the Dallas Mavericks in Game Six of the Western Conference Quarterfinals during the 2007 NBA Playoffs at Oracle Arena on March 3, 2007 in Oakland, California. NOTE TO USER: User expressly acknowledges and agrees that, by downloading and or using this photograph, user is consenting to the terms and conditions of the Getty Images License Agreement. Mandatory Copyright Notice: Copyright 2007 NBAE (Photo by Andrew D. Bernstein/NBAE via Getty Images)

I wanted to wait at least until the New Year to talk about the NHL and the NBA. The seasons are so long and so much happens from quarter to quarter that I felt that anything I said early in the season would be just more gibberish, the kind I hate. But the Philadelphia 76ers have started the season with no wins and the Golden State Warriors have started out with no losses. Bothe teams have played enough games to demonstrate discernible trends. This week I'll talk about the Warriors and next week I'll get depressed talking about the 76ers.

No One Saw This Coming

Last year few chose the Warriors to win the NBA championship. They had a rookie head coach who had never coached at any level. No one denied that Steve Kerr was smart. No one denied that he was a great shooter. But no one expected him to transform a good Warriors team into a true championship contender in his first season. It was expected that he would make too many mistakes to lead the Warriors deep in the playoffs. Well, everyone was wrong about Steve Kerr and the Warriors.

Michael Jordan famously said after Steve Kerr made the winning basket on a pass from a double-teamed Michael Jordan in 1997 that there was no one in the league he would rather see take that shot than Steve Kerr.

Steve Kerr deserves a lot of credit for transforming the Warriors from a very good team that won 51 games to a juggernaut that won 67 games and this year should threaten the Bulls' record of 72 wins in one season. Two years ago, the Warriors made the fewest passes in the league and won 51 games. Last year they led the league in passes, assists, and points off passes and won 67 games. Steve Kerr clearly showed them that they could be a much better team if they played together. Here's another quote from Michael Jordan: "talent wins games but teamwork and intelligence win championships."

Making the Three-point Shot the Centerpiece of Your Offence

Steve Kerr shot 57% from three-point range in his senior year in college, the year the NCAA adopted the shot. He shot 52.4% in 1993-94 in the NBA, demonstrating that a great long-range shooter with the patience to take only good shots can be a star in the league.

Shooting and making a high percentage of threes is a skill that is still far from universal in the NBA. The great Oscar Robertson tried a few three-point shots when the shot was adopted by the NBA in 1979, missed them all, and disdainfully said that the shot was "out of my range".

The all-time three-point leader is Ray Allen; in 1300 career games he averaged about 2.5 threes per game. Steph Curry is averaging five threes per game this year. In his rookie season Steph made two threes per game but his shooting percentage that year and this year are almost identical. Clearly, the Warriors have a much different offensive ethos than any team that has played in the NBA with the singular exception of the hapless Denver Nuggets under Paul Westhead when they shot ridiculous shots and lost games in which they gave up 150 points or more.

How Good Can Steph Curry Become?

This discussion must put a great deal of focus on Stephen Curry. He won his first NBA championship in his sixth season. Michael Jordan won his first of six championships in his seventh season. Steph Curry has raised the number of three-point shots taken to 11+ this season. His three-point shooting percentage is almost the same as in his rookie season. This means that his coach and his team recognize that he is an unstoppable force from three-point range.

His assists are down from the high three years ago but at six per game, they are still a good indicator of his floor vision and unselfish play. The Warriors are a team that was built to accentuate the skill set of the big star and has been molded in the image of Steve Kerr, shooter extraordinaire and last year's rookie coach.

Average in Some Areas

The Warriors are not a great rebounding team but also not a poor one. Rebounding is simply not their strong suit. Steve Kerr was the epitome of a shooter during his career. He wasn't fast, wasn't a good defender, but if you needed clutch shooting Steve Kerr was one of the top one-dimensional players in the game. Steve rarely took a poor shot; he knew that there were better players than he on the court but when he was open he shot. He knew how to get open, catch and shoot. These are things he taught the Warriors last year.

Who Will Beat Them?

The Golden State Warriors have done something that no one saw coming: they changed the concept of Showtime, as it was developed by the Lakers under Magic Johnson, from a fast-breaking run to the basket to a fast-breaking run to the three-point line! The three-point shot was expected to spread offences and thus defences; under Steve Kerr's management and Steph Curry's great leadership the three-point shot has become a weapon that makes the Warriors almost unbeatable.

SHARE
Facebook
Twitter
Previous article Would the NHL All Star Game Be Improved by Going to a 3 on 3 Tournament?
Next article Philadelphia 76ers Experimenting Historically Brilliantly or Historically Badly
Related Articles