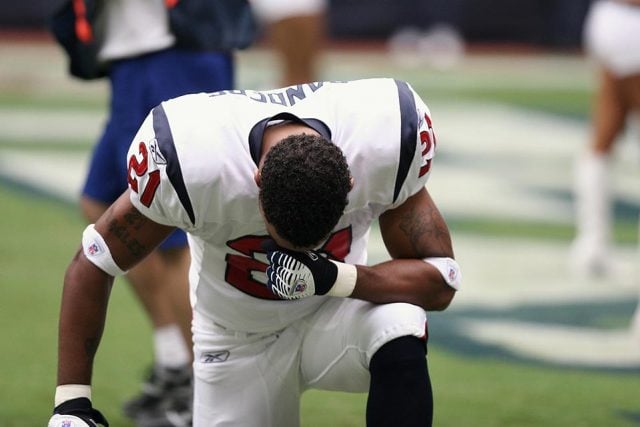 The NFL pre-season games have just kicked off, and the National Anthem protests are back.

Players from the Seahawks, Eagles and Dolphins demonstrated during the national anthem at a number of NFL pre-season games last Thursday night. In Philadelphia, Eagles safety Malcolm Jenkins and cornerback DeVante Bausby raised their fists in protest during the singing of the anthem, while other kneeled, rather than standing tall. Eagle’s defensive end Michael Bennett took another approach, and protested by walking out of the tunnel and towards the bench while the anthem played, and all the Steelers stood alongside him. Commenting on the protest, Jenkins noted that everyone is now waiting to see what the NFL is going to do, adding that his team will not let the league stop what they stand for.

According to Jenkins, it is important for NFL players to utilise their public platforms, as for some reason, the demonstration has been painted in a negative light. He also intimated that often, players have to defend their reasons for fighting for the rights of all Americans, when in actuality they are simply doing what he termed the right thing.

In Miami, Kenny Stills and Albert Wilson protested alongside defensive end Robert Quinn during the national anthem. The two aforementioned players kneeled behind their teammates, who stood lined up along the sidelines raising their fists. The Buccaneers, on the other hand, did not seem to participate in the demonstration.

Stills, who kneeled during the 2016-17 season anthems, has also been vocal in his discussions of social injustice that inspired the NFL players’ protest movement. So far, he has even received support from former NFL quarterback Colin Kaepernick, a leader of the movement at hand. 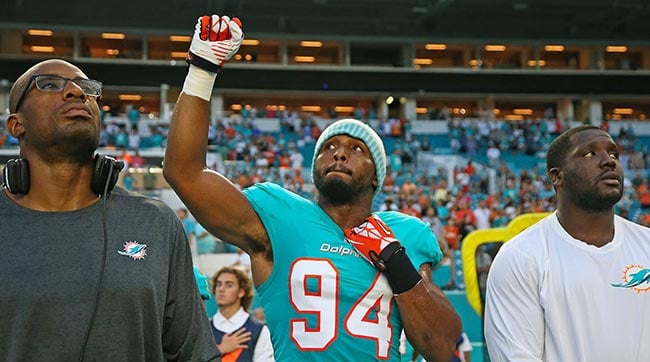 Robert Quinn raising his fist in protest during the anthem.

Elsewhere in Seattle, three players from the Seahawks also ran into their tunnel before the Star-Spangled Banner began to play. Branden Jackson, Duane Brown, and Quinton Jefferson left the field after team introductions and before the anthem began, returning immediately after it had concluded. All three players were among the Seattle group that sat during last season’s anthem.

Both teams in Baltimore stood during the anthem, while in Jacksonville, yet another four Jaguars players remained in their locker room. They included corner-back Jalen Ramsey, linebacker Telvin Smith, and running backs TJ Yeldon and Leonard Fournette. According to Smith, his actions were his way of taking a stand for a good cause, noting that he hopes that people recognize and respect his views and his decision.

The league and players’ union have still not announced a policy this season regarding anthem demonstrations, after the NFL originally instructed its players to stand on the sideline or remain in their locker rooms for the events. Reportedly, the league has also been engaged in discussions with the NFL Players Association regarding issues of social justice, and has agreed to delay the implementation of any club rules that could result in players being disciplined for their demonstrations. 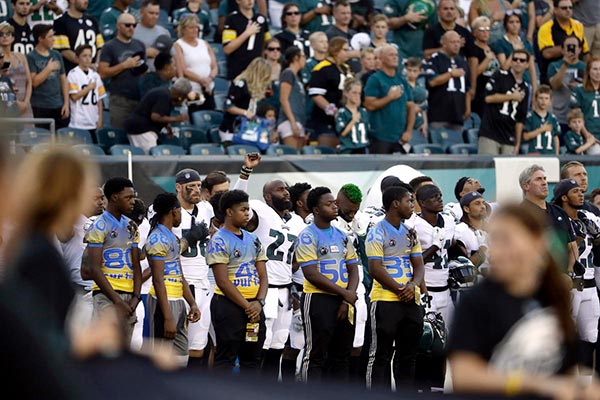