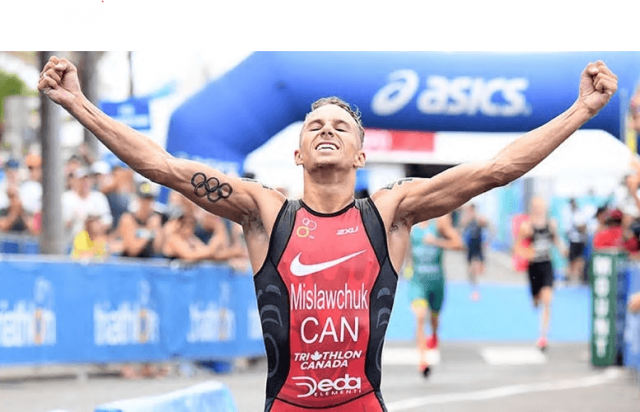 Tokyo humidity and general triathlon hell proved no match for Canadian star athlete Tyler Mislawchuk when he recently sprinted over the finish-line a smooth 4 seconds ahead of the pack to claim gold in the Olympic test event in a stellar time of 1:49:51. Casper Stornes of Norway finished in second place, and third place belonged to New Zealand’s Hayden Wilde, who managed to do his bit in 1:50:03.

The swimming portion of the race proved no match at all to the Canadian, but he wasn’t yet primed for the win going into the second stage. He and teammate Matt Sharpe came out of the water in 9th and 11th place respectively. Mislawchuk said after the race that the superb understanding and teamwork between Sharpe and himself was what had ultimately catapulted him (Mislawchuk) into the first place position.

Read More… Curt Schilling To Run For US Congress

The 40-kilometer bike challenge was up next. By the end of stage 2, the Canadian duo had managed to work their collective way into 8th position overall. Mislawchuck ended up being second of the launchpad for the run, and he and teammate Sharpe pushed full-steam ahead and managed to lose the Norwegian with only 2 kilometers to go.

The continued to run side by side right up until the final stretch. At this point in the race, it was Mislawchuk who had had the legs with which to outperform the remainder of the pack, and so it was decided that he would be the one to have to sprint it out for the gold. The duo said that they had planned that whoever had the strength to gun for the gold would be doing exactly that and that it had been planned as such right from the get-go. The aim was the medal and to bring the gold home to Canada.

Back And Better At That

Sharpe had unfortunately by that point been so spent that he did not finish the race. Neither did their fellow Canadian Alexis Lepage. The gold was however in the bag for Canada, and that was after all what they had set out to achieve.

By winning the test event Mislawchuk had finally successfully overcome 3 years of struggling to make his way back to the top after having finished in 15th position at the 2016 Olympic Summer Games. The athlete had been battling a leg injury ever since, but the latest result is undisputed proof that the Canadian is back, and even better than before.

Bet on the BIGGEST races ONLINE. Canada’s top sportsbooks are waiting for YOU!