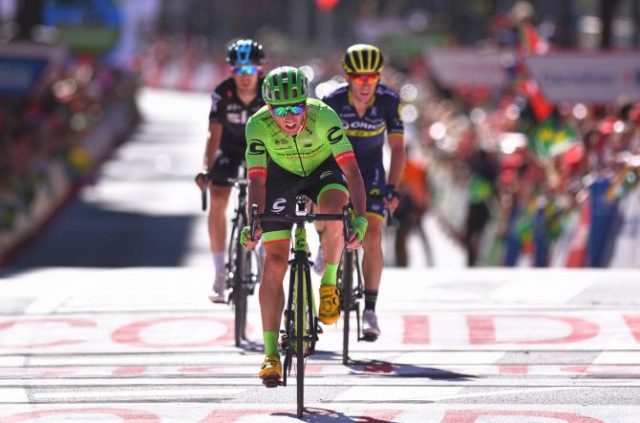 Mike Woods more than earned his spot in the Vuelta a España history annals in September. Not only was the 31-year-old cyclist the second Canadian to win a stage of the famous race, but was also the first one to achieve a spot on the podium at the finish in more than 30 years.

Woods rode into third place in Innsbruck, Austria, on the weekend. Second place went to France’s Romain Bardet, while Spain’s Alejandro Valverde won with a time of 6 hours 46 minutes. The last cyclist from Canada to place in the top 3 at the race was Olympic road cycling medal winner Steve Bauer in 1984.

A Year Makes a Difference

Woods’ third-place Vuelta a España finish proves that, while a year may not be all that long, it can make a big difference. Speaking at last year’s event, the cyclist said he had to overcome a mental obstacle before participating.

He also said he never thought he would reach such a high level of cycling, even though he had yet to win a stage of the race. He added that the only way he would be able to further his successes would be to focus on – and enjoy – the present moment. According to Woods, not doing that was one of the reasons his distance running career came to an end.

This year, the cyclist said the cheers of fans and the sound of their cowbells during the final stage had made his ears ring. Not that he minded, because it was that good cheer that provided him with the energy and inspiration needed for his impressive finish.

In a couple of tweets, he said that he was proud of his achievement and of the performance of the other Canadian cyclists, and added that thanks were due to more people than could be mentioned. He also sent a greeting to Britton, Duchesne, and Houle.

This year has been a good one for Woods, despite injury, illness, and a death in the family. The Vuelta a España was not the first time he impressed on the roads.

In April, he took second place and became the first Canadian to place in the top 3 of the respected Liè​ge-Bastogne-Liè​ge race. The following month, he was a Giro d’Italia Stage 4 runner-up. At this rate, a first place at next year’s Vuelta a España looks more than possible.