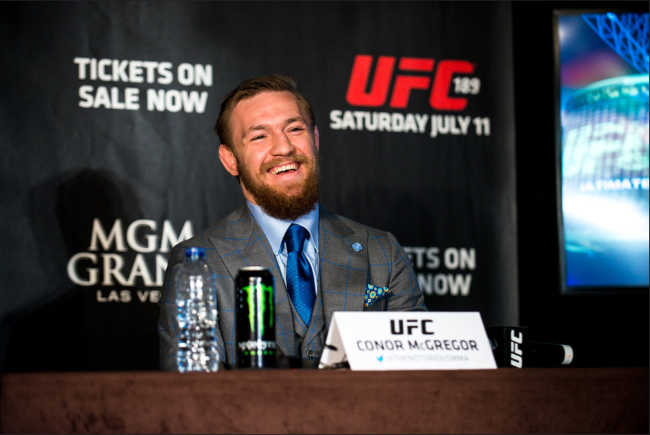 Conor McGregor hasn’t been back in the UFC fight ring since he lost to Khabib Nurmagomedov by way of a 4th round submission at the Octagon in Las Vegas back in October of 2018. Not that McGregor has been enjoying the time off at home; everything but. In fact, he’s been busy to the extent of a number of run-ins with the law. But that’s all behind him now, says McGregor, who is currently preparing for Saturday’s standoff with Donald “Cowboy” Cerrone at the Octagon in Las Vegas.

FanDuel has McGregor pegged as the firm favourite for Saturday’s fight. One would think that this would be enough to send the Irishman off the rails when remembering the pomp and swag that preceded the 2017 “money fight” that drew Floyd Mayweather from retirement for the third time. And yet, obviously has other things on his 31-year-old mind.

In fact, the only thing Conor McGregor seems to get really excited about, is the prospect of drawing Floyd Mayweather from retirement for a fourth time; something he has sworn to do. But its also something Mayweather has vowed “will never happen”.

But even if UFC boss Dana White were to succeed at motioning a handshake deal between himself and Mayweather in the direction of a fight with McGregor, the Irishman will remain the least likely to win the fight by far. Not that that did anything to stop the MMA fighter from taking on Mayweather back in 2017. The odds weren’t exactly in his favour back then either.

As for his time away from the ring and on the wrong side of the law, McGregor is adamant about now being done with all of that. He says that it had simply been a matter of doing what he knew he had to do all along and that once the decision had been made, everything turned out all the better for him.

The Long Road To Money

McGregor’s journey to UFC fame hasn’t been easy. Not many people realise that McGregor’s life before knocking out Marcus Brimage back in 2013 looked a lot different than what it does today. The $60,000 bonus earned for his performance against Brimage had indeed been a massive step up from having to survive on welfare cheques for the longest time.

And now that he’s had a taste of the big money and knows full well how to go about spending it too, he by his own admission has developed an appetite for more. Looks like another money fight may be on the books after all.

Bet on Boxing AND MMA online. Find out MORE at a top sportsbook!