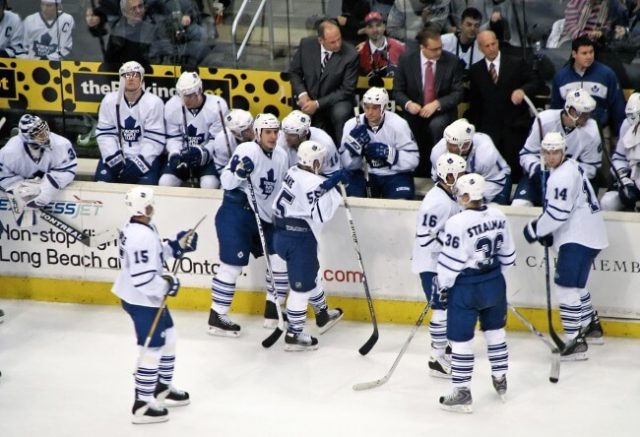 Let it be said that Mike Babcock gives new meaning to what it means to “tumble out the gate”. Not even being handed the plushest of contracts ever offered to any head coach in the history of the NHL worked the kind of magic necessary to lift Toronto from its losing groove and set the team down gently just on the other side of the first round of the playoffs.

But spilt milk and all that aside, a 6-game losing streak is apparently all it took to nudge the good coach from his cushiony money seat. The word is out and the deed is done: the Toronto Maple Leafs have fired Mike Babcock and have crowned Sheldon Keefe the new big gun in charge of winning and losing.

Read More… Lawrence Has No Hard Feelings Towards Collaros

No Fake Talk – Mercy Be

It was no fake sanctimonious affair involving false praise and typical break-up “its not you, its us” lingo either. Thankfully. Five losses in regulation and a genuine concern for the team that very much represents the heart of a nation were in all likelihood what finally struck the gong for Babcock and led Leafs president Brendan Shanahan to make the by-his-own-admission tough decision to board a plane from Toronto to Arizona in order to deliver the difficult tiding in person.

Kyle Dubas boarded the same flight. Dubas would under dead-ordinary circumstances have been the one to deliver the news himself and with no real help from Shanahan. But according to the president in office, he had had too much to do with Babcock’s 2015 appointment to simply let go and let Dubas.

As for Babcock, its not certain whether he has a strong case of denial going on or whether remaining up on the beat is just his way of dealing with the inevitable. Shortly after the dismissal was officially announced on the team’s Twitter account, Babcock launched a heartfelt well-wish-slash-jab of his own when he tweeted about how he had been under the impression that he had in actual fact done a pretty amazing job by helping a franchise up from its knees and into the 100-point seasons league. Babcock is apparently furthermore under the impression that getting into the playoffs at all is a stellar piece of trickery on the part of Toronto.

In Babcock’s defense, humungous perks handed round freely to Marner and Matthews did pretty much mean that many of his old trusted and tried-s were nowhere to be seen after they had been forced to skip the deal due to a crippling pay-crunch.

Now if only Sheldon can make it rain.

Bet on the most exhilarating sporting action ONLINE. Sign up at a sportsbook NOW!