Toronto’s Travis Dermott Out For 6 Months 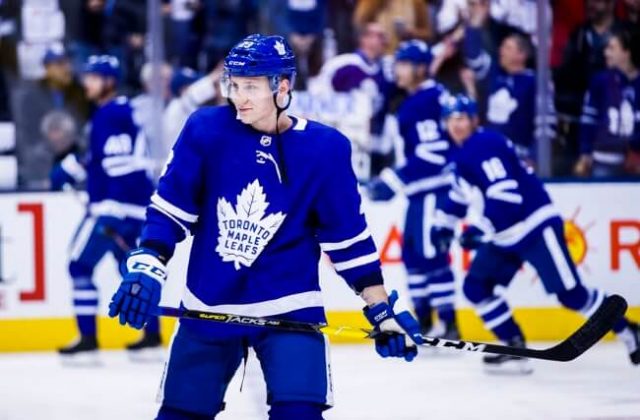 Toronto Maple Leafs defenseman Travis Dermott is headed towards a 6-months no-play break as a result of his having had to undergo surgery to his shoulder. What this means is that the defenseman will not be available to play until at least the second week of November. Dermott will miss training camp as well as the beginning of the 2019/2020 season, which is deemed a very critical time.

Dermott had managed to injure his shoulder during Toronto’s 6-2 victory over Edmonton on February 27th. He was made to head shoulder-first into the boards by Edmonton’s Brad Malone. After that, Dermott ended up missing out on 14 contests, before having returned to compete in the Leafs’ last five regular-season games, as well as its playoffs with the Bruins.

However, the surgery proved to be something that the star would not be able to get out of due to the nature of the injury, and so it’s a 6-months no-play that lies ahead now, whether or not anyone feels like it.

22-year-old Dermott defended the Maple Leafs’ honour in a total of 64 games this season. He managed to rack it up by achieving 4 goals and 13 assists. He then went on to compliment his achievements by adding another goal and 2 assists to his list during the first-round defeat against Boston, which in total consisted of 7 playoff games.

The Ontario native has played a total of 101 career NHL games, and has registered a total of 30 career points. He was selected by Toronto during the second round of 2015’s National Hockey League draft, and the Leafs have not regretted his selection at any point since then.

The question now is whether Dermott’s absence will in any way alter Toronto’s off-season plan. But with that still being an issue, it must be said that the Leafs did think ahead in terms of contingencies such as exactly this. Calle Rosen and Andreas Borgman will both be able to step in when needed and the acquisition of Jake Muzzin certainly helps a great deal.

Plugging possible holes in advance is one of the secrets to any team’s ongoing success, and Toronto appears to have made good work on learning from lessons from the past.

Want to bet on the NHL? Canada’s TOP sportsbooks have the BEST odds online!