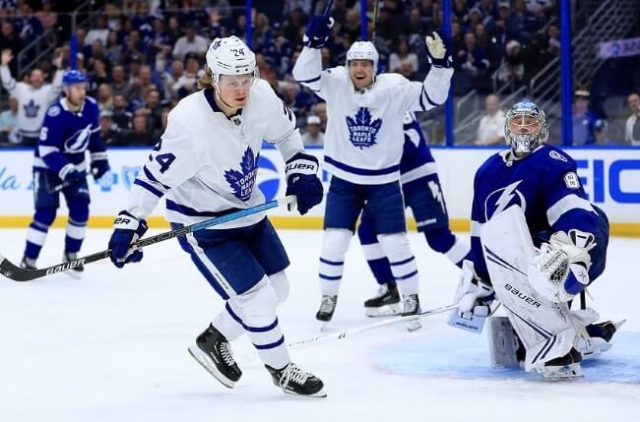 Not being overwhelmed by the free agency frenzy isn’t easy. Ask anyone. But in particular, ask the Leafs. Toronto on Monday managed to swing fate’s pendant in their favour when the team secured a giant-sized trade in the form of swopping out Kadri, Rosen and a 2020 3rd round selection in return for Barrie Tyson, Alex Kerfoot and a future 6th rounder. Not bad, Toronto, not bad (or so some will say, and others will not).

Mixing and matching is the name of the game, or so they say. Even so, Barrie Tyson is the sweet sugar making the latest deal worth the money and effort. What with Colorado having had its sights set firmly on Kadri for quite some time, it all worked out well enough in the end; or at least well enough as far as free agent frenzies go. Mutual fits are a rare occurrence.

One cannot help but surmise at just how much Kadri’s final act with the Leafs had to do with Toronto’s willingness to let go, let Colorado, and let God. It all went down during a seven-game loss to Boston in the early stages of the playoffs. Jake DeBrusk appeared to be surprised and stunned after finding himself poised on the receiving end of a crosscheck to the head, courtesy of Kadri.

Since Kadri had a year ago performed the same foolish stunt, also in a game against Boston, the writing was now firmly on the wall. A suspension followed; one that saw Kadri in the dog box for the remainder of the series.

When asked whether Kadri could be trusted to keep his cool, Leafs GM Kyle Dubras responded that the trade hadn’t had much to do with Kadri’s temperament at all. But the undertone was clear and much was said without having been actually said.

When asked how the bulky Kadri’s absence is expected to affect the physical side of Toronto’s line-up, Dubas responded that there were many other things that mattered too, and not just grit and size, such as for instance raw talent.

The GM said that he felt confident about the fact that the team would ultimately grow into a space of developing its own special brand of grit. There was not much more to it than conditioning and growth, said Dubas.

Want to put money on YOUR favourite NHL team? Place YOUR bets online!