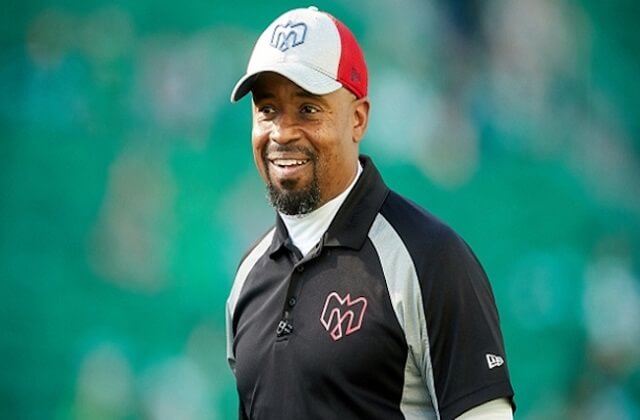 Montreal Alouettes head coach and former Winnipeg Blue Bombers quarterback Khari Jones says he’s all too familiar with George Floyd’s tragic story – or at least with the sort of racism that’s obviously alive and well even today. A teary-eyed and clearly emotional Jones during a teleconference earlier this week revealed his own brush with racism during his time playing for the CFL’s Winnipeg Blue Bombers.

Jones spoke of how he had received death threats in the form of letters over his interracial marriage. Jones is black and his wife, Justine Jones, is white. According to Jones, he still has the letters in his possession, and every once in a while, takes a look at them, even though they were received 20+ years ago. The person who wrote and sent the letters to Jones was never found, and it’s a bitter pill for Jones to swallow knowing he’s still out there, and that others like him are out there too.

Perhaps even sadder still is the fact that the letters and threats directed at Jones weren’t his first encounter with racism.

Being Black While Walking

Jones tells of how in the early 90s during his days at UC Davis, only a college kid himself, he, his brother and a few friends were wrongfully arrested – at gunpoint. They were then forced to the ground and handcuffed by a group of white policemen in Sacramento (California). Jones says that even though it was later pointed out as having been a case of mistaken identity, he and his brother and friends had coined a phrase for white on black police misbehaviour during his college years: being black while walking.

Khari Jones is to this day clearly able to recall what it felt like to be pointed out based solely on the colour of one’s skin and describes the feeling associated with something like that as “tragic and horrible”.

The Montreal coach took to Twitter on Monday to comment on the recent death of 46-year-old George Floyd, the man who had died in Minneapolis during his having been held in police custody. A video of the incident clearly shows a handcuffed Floyd lying face down as a result of white policeman Derek Chauvin’s knee on the back of Floyd’s neck. Chauvin’s knee remained in place for nearly 9 minutes. Chauvin can also be seen keeping his knee in place for at least 53 seconds after Floyd becomes completely and obviously unresponsive.

Jones now says he cannot stop thinking about George Floyd, because to Khari Jones, George Floyd is inside of him.