The Ins and Outs of Kin-Ball 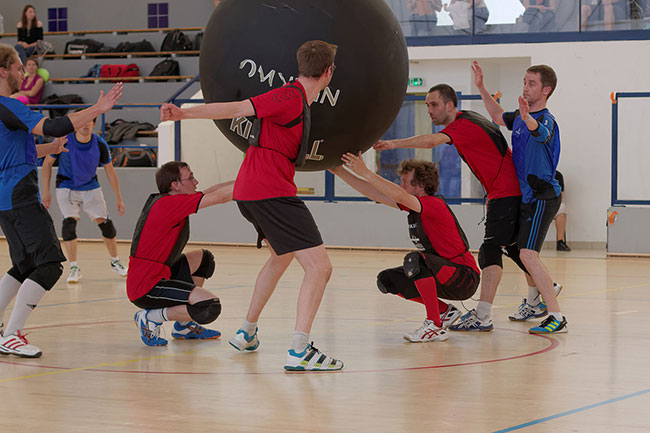 The world is a big place, which you were probably already aware of. Given its size, there are more than a few interesting sports out there, many of which have remained tied to a particular location, such as Gaelic Football and Aussie Rules. Efforts may have been made to spread the sport to a wider audience, but, for whatever reason, it just never caught on in the mainstream. Perhaps, in some cases, because the sport is so odd in nature that many don’t exactly know what to make of it.

Point in case; Kin-Ball. At first glance you might assume you’re looking at some or other game played in jest, given the unusual size and nature of the ball being used. Which is to say; it’s a rather bigger than anticipated ball, filled with air. But give the game a chance and you’ll soon realize that Kin-Ball is a great deal of fun, and an excellent sport for children, though also enjoyed by adults on a professional level. So, as with a game like online Roulette, which might also seem daunting at first glance, there is much enjoyment to be found if you explore below the surface.

Kin-Ball came about in the 1980s. Mario Demers, a physical education teacher, wanted to create a sport that would encourage a wider audience of children to engage in a healthy, physical activity. But, specifically, he wanted it to be a sport that was fun, engaging to look at, and included everyone. The idea he came up with was Kin-Ball.

After an initial period of testing the idea out with children, in 1987 Demers approached game and sports design company Omnikin. With the help of the company, the sport was officially created, and in 1992 the Quebec Federation of Kin-Ball was founded.

The game requires 3 teams of 4 players. While 2 teams play, the 3rd spectates until it is their turn to play. The teams rotate until a winning team is declared. 7 periods, of 7 minutes each, are played between the 2 active teams. A 2-minute break is allowed between each period of play.

On the court, the teams are required to stay on their side, officially marked by a separation line in the center of the court. The ball is served by the starting team into the opposing teams side. If the ball touches the ground, the other team scores a point. Hence, the idea is to avoid the ball touching the ground, in a similar fashion to volley ball.

The major difference is that all parts of the body can be used to interact with the ball, without exception. 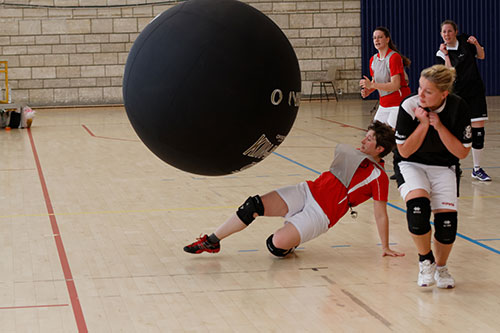 The most prominent feature of the game is the ball, which is a regulation size of 1.22 meters. It is light, filled with air, and can most accurately be compared to a classic beach ball. This is a major point of the game that makes it enjoyable, allowing experimental, fun exchanges and interesting tricks to be performed, without fear of getting hurt.

The official size of the court used, in professional games, is 21 meters by 21 meters. However, it is also acceptable for a reasonable space of just about any size to be used. Hence, virtually any school gymnasium is a good place for Kin-Ball to be played.

On a professional level Kin-Ball is played across the world, with a focus in European countries including Belgium, Switzerland, Germany, and France. Though it is Canada where the game is considered most popular, with the country having never lost a World Cup tournament!

Tokyo Olympics To Be Postponed

Why Curling Is A Thing Of Complexity In Canada

Workers Say CSEC Move A Slap In The Face

NCAA Says No March Madness Due To Covid-19

China’s Hantavirus No Cause For Concern