Hear Ye Hear Ye The World Series is upon Us 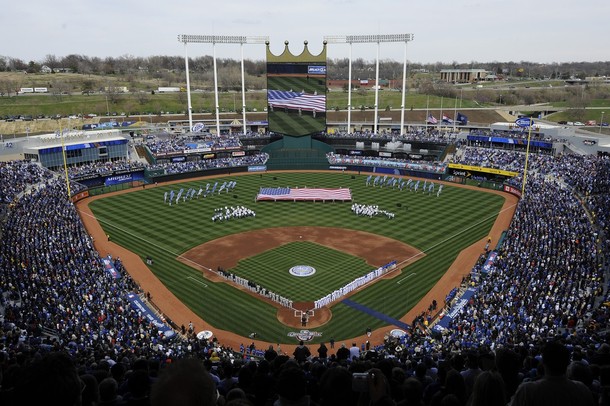 KANSAS CITY, MO - APRIL 10: A general view of Kauffman Stadium during opening day festivities prior to the New York Yankees against the Kansas City Royals on April 10, 2009 at Kauffman Stadium in Kansas City, Missouri. (Photo by G. Newman Lowrance/Getty Images)

The World Series will be between the Mets and the Royals. The Royals were the epitome of consistency, winning 95 games and cruising to the playoffs. The Mets started the season hot, cooled off dramatically and then ran to the playoffs on the strength of hard throwing young pitchers and an offence that needed a big bat and found it in Yoenis Cespedes.

Last year the Royals surprised most casual fans by reaching the playoffs for the first time in 29 years. Few fans knew the names of their players and, when looking at the more popular statistics such as batting average and ERA, many people wondered how such an "average" team made it to the playoffs let alone the World Series.

Here are two stats that tell us a lot about the Royals' success both last year and this year when at least they didn't surprise people. The first stat has to do with the Royals' bullpen. In the playoffs, runs are precious commodities. Of course, they're precious in every game but in the playoffs a run may mean the difference in a game and a game may make the difference between advancing to the next round and watching the next round on television.

So, by allowing manager Ned Yost the luxury of going to his bullpen in the 6th inning if he needs to, the Royals can eliminate the risk of having their starting pitcher face the opposing lineup a third time. Teams tend to score at least a third more runs against a starting pitcher they are seeing for the third time versus runs scored the first two times they go through the lineup against the pitcher.In the regular season, starting pitchers have to go through the opponents' lineups three times to save the bullpen pitchers' arms. In the playoffs, pitchers have more days off for travel so the deeper your bullpen, the less likely you are to lose a game because you kept your starter in too long.

Ironically, this is not how the Royals won game 6. They brought in a secondary reliever who gave up two runs but their bullpen held the Blue Jays at the end and the Royals squeezed out one more run to win the game. During the regular season, managers have to use their weaker relievers to save the arms of their better pitchers. In the playoffs such a move was a huge gamble and Ned Yost almost lost his gamble. He was saved by the best arm in the Royals' bullpen plus the second aspect of the Royals' great success these last two years which is thatâ€¦

The Royals are the hardest team in the majors to strike out. In contrast, the Cubs struck out the most in the majors and lost to the Mets without putting up much of a fight. By not striking out, the Royals make more contact than any other team in baseball. It was contact that created the single that scored the winning run in game 6 against the Blue Jays.

The Royals did strike out 8 times in game six versus 11 strikeouts by the Jays. But a simple analysis of those strikeouts indicates the Royals' bat control and overall offensive superiority. The Royals struck out 8 times against David Price and not once against the Jays' bullpen. The contact single that Eric Hosmer hit in the corner on which Lorenzo Cain scored from first because Jose Bautista threw to the wrong base was similar to the pitch Ben Revere struck out on in the 9th with the tying run on third base. The difference was that the pitch to Hosmer was almost in the strike zone and he made contact with it. The pitch to Revere was clearly out of the strike zone. It more closely resembled the pitch that Cain laid off of to draw the leadoff walk in the bottom of the 8th.

Who Expected a World Series for the Mets?

Before this season the Mets had made the playoffs only once in 14 seasons. The Mets' franchise was becoming the poster boy for mediocrity. The Royals last year went to the playoffs for the first time in 29 seasons. The difference between the Mets' long post-season drought and the Royals' is that Kansas City is a small market with limited ability to sign high-profile free agents. The Mets are fromâ€¦. New York, for goodness sake! How any team from New York can fail miserably so often is beyond my imagination!

The Mets began a rebuilding program five years ago under new General Manager Sandy Alderson. They put together a strong lineup that nevertheless lacked the decisive hitter that champions need coupled with a pitching staff filled with powerful fastball pitchers.

No one was surprised when the Mets started the season well nor were many surprised when they played under .500 in May and June. In July they were only one game over .500 and 2015 seemed to be another rebuilding year. Then they traded for Yoenis Cespedes and the offence became supercharged. The young arms matured, especially given their suddenly big run support, and the Mets rocketed to the top of the Eastern Division.

The Two Contrasting Paths to a Championship

The Royals will try to win the World Series following the same formula that got them 95 wins in the regular season plus convincing wins against Texas and the Jays: make contact, produce in the clutch, go to the bullpen early, and play excellent defence.

The Mets will try to win with their formula: score a lot of runs and give the ball to young fastball pitchers.

In a short series in which the importance of every run is heightened, the Royals' ability to manufacture runs with base-running and high contact hitting will contrast with the Mets' power game. If the Royals win the on base percentage battle they will doubtless win the Series. The Royals' deep bullpen will contrast with the Mets powerful arms. The most crucial element in the Series may very well be the Royals' third time through the lineup against the Mets' starters.