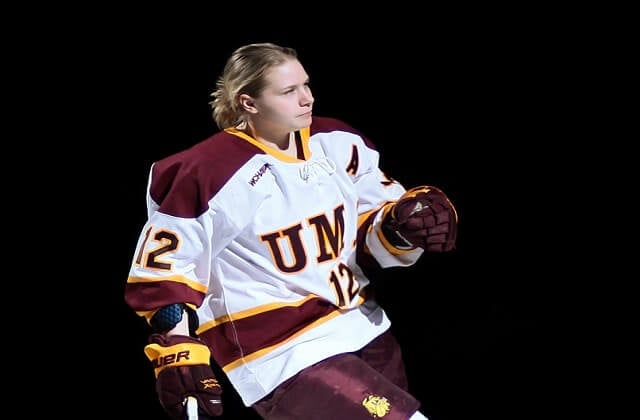 Canadian women’s national hockey team forward and two-time Olympic gold medallist Haley Irwin is retiring from national pro-hockey. The 31-year-old Thunder Bay, Ontario, native during her career playing Canadian pro-hockey compiled an impressive 38 goals and 42 assists playing a stunning total of 108 career games on behalf of the country. This in addition to her having won Olympic gold in 2010 as well as in 2014, and Olympic silver in 2018 – all as a member of the national Canadian team. Irwin furthermore represented her country in a total of 5 world championships, during which she won one gold medal and four silver medals.

Irwin, who now works as an assistant hockey coach at Ryerson University and coaches the Rams women’s hockey team, in 2014 suffered a concussion as well as an injury that ultimately led to hip surgery. These events managed to sideline Irwin for two years between 2014 and 2016. The tenacious player however managed to recover from the injuries and surgery and made her way all the way back to playing for Canada in the 2018 Olympic final in PyeongChang, South Korea.

Irwin on Wednesday released a statement explaining her decision to retire from playing professional national hockey, saying that hockey had been her passion ever since she was a young girl dreaming about one day playing for her country. She wrote of how she felt exceptionally fortunate to have been able to play in such a way that she was eventually chosen to proudly wear the Maple Leaf and thereby represent what she describes as an “amazing” country.

Irwin also wrote about how hockey had taught her countless valuable lessons over the course of her career, along with having afforded her many “amazing experiences” that helped mould her into the person she has grown to be in the present day. The star forward then closed off by saying that the privilege of having played for Team Canada was to her a true dream come true and a dream she knows she will take along with her for the rest of her life.

The Drive To Succeed

Haley Irwin is described by former teammate Gina Kingsbury as a player driven to win and one ferociously competitive. Kingsbury is of the opinion that these attributes are the reason behind the two-time Olympic gold medallists’ stellar career-long success.

Irwin throughout her professional career played for the Montreal Stars and for Calgary Inferno in the CA Women’s Hockey League.

Bet on HOCKEY online! Be a winner with sports betting TODAY.