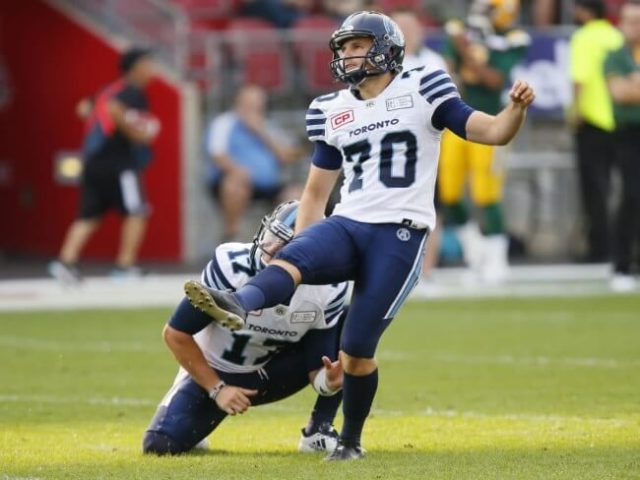 Is there any quality in pro-sports quite like consistency? It’s this very thing that has ensured that Hamilton Tiger-Cats veteran Canadian kicker Lirim Hajrullahu has been signed by his team for 2 more consecutive seasons. The star-kicker managed to score a 46 out of 54 field goal attempts tally and a 41 out of 46 conversion rate during last year’s season. The 28-year-old CFL player also boasts a 45-yard punting average stint.

Hajrullahu has done his fair share of regular season show-ups too. He has appeared in a total of 89 season’s games, playing for Winnipeg, Toronto and Hamilton, respectfully. Hajrullahu stands tall at a proud five-foot-eleven and weighs in at 205 pounds. He is a native of St. Catherines, Ontario, and is quite proud of his heritage.

As the old saying goes, being signed is what everyone wants, but being re-signed is a matter of merit. Football teams are not at all keen on signing someone on the off chance that some sort of a performance may enter into the equation. It must be remembered that sports isn’t only about games and competitions; but its business too.

Business that is very necessary if any team is going to keep going and keep its house in order financially. Just about everything is influenced by how players perform during any given season. It may seem to be bordering on a dog-eat-dog approach but as soon as it transpires that a player cannot be relied on to perform in accordance with not only the team’s set standards, but also with his own, management tends to lose interest in that player.

Reliability and consistency are two of the most important factors when re-sign decisions are made.

Of Bettors And Records

As for our man Hajrullahu, there doesn’t seem to be any ailments or hiccups or bothersome hindrances keeping him from playing his best game. And not only does he play his best game, but he does so as regularly as rain.

This extends as far as the world of professional sports betting. What with sports betting having now being legalised in the US, more intense levels of interaction between pro-sports and the betting industry are bound to follow.

Bettors value nothing more than what they do consistency, and for obvious reasons. Hajrullahu is every pro-bettor’s ultimate dream player.