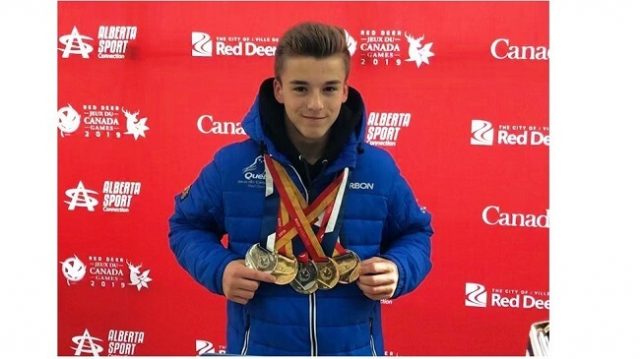 Pro-athletes generally agree: winning isn’t everything, but it sure does sweeten the deal! Just ask Quebec gymnast, Felix Dolci. Dolci has managed to do what many dare only dream of, by having scooped up the most medals ever won by any athlete at the Canada Winter Games.

This week’s Games saw the gymnast walk away with four gold medals and two silver medals; catapulting his total to 11 medals won over two Winter Games. His previous run was in 2015 when he won two gold and 3 silver. That year, the Winter Games was hosted by Prince George, B.C. Dolci’s record number of medals won saw him surpass the previous record-holder, namely Matthew Halickman. Halickman, also from Quebec, had secured a superb 9 medals at the Winter Games.

Dolci now has his sights set on the 2020 Olympic Games, which will be hosted by Tokyo.

Artistic gymnastics was on show at the very first Canada Winter Games back in 1967, and has a long and rich shared heritage with the Games. Today, gymnastics is one of the most popular activities in the country, and continues to grow each year.

The competition floor and lay-out looks very much the same as what it did during those first years of competition. The only notable changes that have been made have been in the interest of improved safety for the participants.

The Canada Winter Games is a highlight on the global sports calendar, and the games for 2023 have already been selected. All sports and disciplines applied for inclusion in 2023 were carefully scrutinised and analysed during the selection process. The total number of sports to be included each year largely depends on a general participation quota in respect of that particular sport. This ensures a fair representation quota.

Today, more sports vie for a spot on the agenda than what the Games is able to accommodate. This ensures a healthy dose of competition among the various disciplines and ensures major growth in Canadian sports in general.

Artistic gymnastics remains a very popular discipline indeed and enjoys the security of a sure slot in every four-year cycle, mainly thanks to its unrivalled popularity.

Bet on Winter Sports online. Back your favourites and WIN!