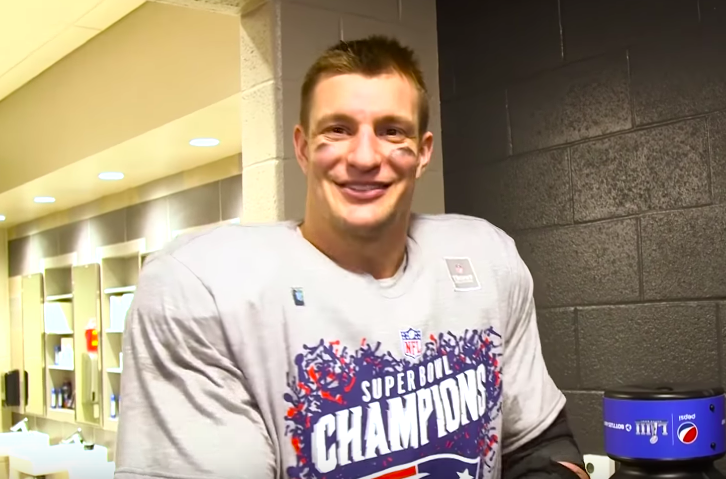 The show isn’t over for retired NFL footballer Rob Gronkowski. The 30-year-old former Patriots tight-end caused quite the stir when on Tuesday afternoon he made the shock announcement that he is officially coming out of retirement. He will be joining none other than former Patriots player Tom Brady in playing for the Tampa Bay Buccaneers.

Gronkowski announced his retirement from playing professional NFL football shortly after the 2018 championship run. The tight-ender said at the time that the decision to retire was the result of the many years of extreme wear and tear on his body and sustained over the course of 9 physically taxing seasons with the NFL. Gronkowski won three super Bowls playing for the New England Patriots and will be joining the Bucs as part of a trade-deal between the two franchises.

But Gronkowski hasn’t exactly been shooting the breeze during his time away in “retirement”. Shortly after his 2018 announcement, he agreed to dabble in a smidgen of broadcasting delight for the NFL on Fox. And needless to say, especially when talking to anyone who has watched Gronk analyse the ins and the outs of the NFL on Fox, it almost seemed as if this was what Gronkowski was actually cut out to do best.

The newest Buc to join Tom Brady and his new teammates made his debut in the world of sports broadcasting on Fox’s Fox NFL kickoff insert on October 20 last year. What folks seemed to enjoy most of all was Gronkowski’s unique “insider insight” on why he considered what he referred to as the Patriot Way to be effective even in a modern-day football era. And it’s an argument that appeared stickier than most, even after New England got absolutely wrecked by Tennessee during a first-round January playoffs defeat.

What made Gronkowski even more of a prime network broadcasting asset to the NFL as well as to Fox, was that he ticked every last box in terms of what every network so desperately covets. Gronkowski the NFL broadcaster has it all: every football fan in American, and most in the world, knows his name as well as who he used to play for, the respect of most fellow- and current players, and a constant sensation on the parts of viewers that Gronkowski knew something that they do not.

In For At Least 1 Year

Gronkowski joins New England with 1 year and $10 million remaining on his initial Patriots contract. And once he’s honoured this to the best of his abilities, he intends on seeing where things go from there on out. As for what happens “next”, Gronkowski shouldn’t have too much trouble settling comfortably into whatever football-related big media position he chooses. Fox, for one, judging by the network’s almost emotional farewell, will be only too happy to have him back after yet another year in the thick of the action. Best of all is that the versatile player-turned-star-broadcaster won’t even have to stick to NFL reporting if he doesn’t want to. After a recent weekend’s worth of hosting WWE WrestleMania, Rob Gronkowski could just as easily take to broadcasting WWE as what Tom Brady takes to shadowing the longest yard.

At the University of Arizona.

Yes. Rob Gronkowski is the only tight-end in the history of the NFL to have reached 1,000 yards.

Where was Rob Gronkowski born and raised?

Born in Amherst, New York and later raised in Williamsville.

How tall is Rob Gronkowski?

No. But he has been dating Sports Illustrated swimsuit model Camille Kostek for a few years now.

Get ready to bet on the BIGGEST NFL games. Place your bets ONLINE!