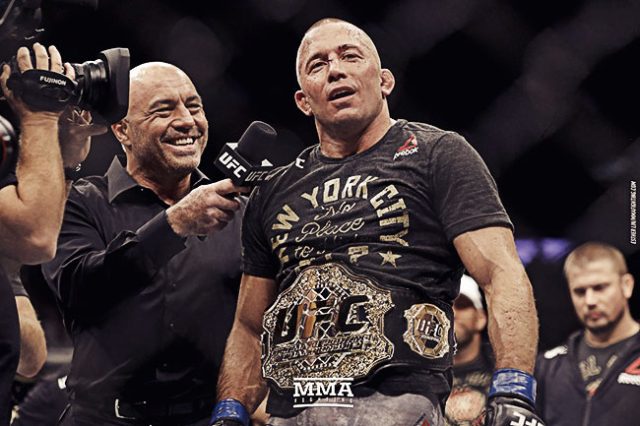 The man accepted as having been the one to put Mixed Martial Arts on the map in Canada, will retire; presumably this time for good. UFC champion Georges St-Pierre is yet to make the news official, but will in all likelihood do so at a Thursday-night press conference to be hosted by the Bell Center in Montreal.

According to those in close contact with the 37-year old, parting ways with the UFC is a bittersweet affair, as he had hoped to be pitted in fight against Russian UFC lightweight champion Khabib Nurmagomedov. Apparently this was not to be, as it did not quite fit in with what the UFC had planned for Nurmagomedov.

Be that as it may, St-Pierre is now set to retire on a 13-fight winning streak.

The St-Isidore fighter had only fought in one fight since stepping away from the sport back in 2013, after having secured nine welterweight title defenses. He then returned to the cage for a brief stint in 2017, during which he had, among other things, managed to dethrone middleweight champ Michael Bisping at UFC 217.

But the comeback wasn’t meant to be long-term, it now seems, as soon after he had beaten Bisping, St-Pierre relinquished the 185-pound crown. The reason for his cutting it down a notch was officially cited as a health issue.

But it wasn’t always easy sailing for St-Pierre. Over the span of his career he had been accused of foul play on more than one occasion. Nick Diaz had gone as far as having accused St-Pierre of the use of steroids in order to gain an unfair advantage over his opponents. And then there was the claim by B.J. Penn that the UFC champ had made use of Vaseline in order to grease himself up to the point of being untouchable and unbeatable.

There were even rumors of his having been in a state of mental weakness; with the question having been raised by UFC president Dana White.

He Fought On Purpose

But let it be said that St-Pierre had been anything but your average fighter. He was notorious for fighting methodical fights, and apparently saw no use in keeping it neat or pretty. His specialty was wearing down and taking advantage of his opponent’s advantages. Which is probably why 8 of his 9 welterweight title defenses was secured by decision.

Want to bet on UFC, Boxing and other sports? Get the BEST ODDS online!