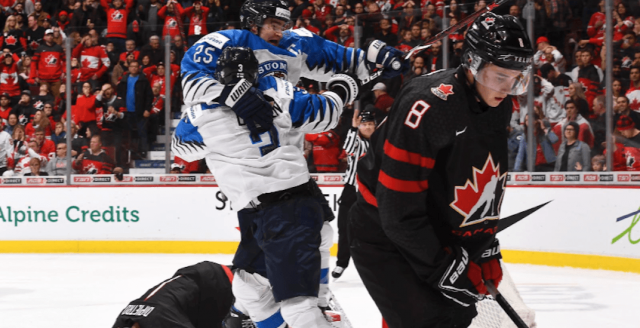 It’s a rare event for a Canadian team to be on the losing end of a hockey game. Unfortunately, however, victories are never possible one hundred percent of the time, and a broken hockey stick ended up breaking the Canadian World Juniors’ chances of scoring a victory in Vancouver this Wednesday.

The Juniors team suffered a heartbreaking loss of 2-1 in overtime on the day, despite it seeming for the most part that they had actually had the game in the bag. There were a mere 46.4 ticks left on the timer in the third period and Canada was up 1-0 when a puck deflected off Finnish player Aleski Heponiemi’s left shin pad.

The puck flew past Canadian goaltender Michael DiPietro, missing the tying goal they needed to gain the upper hand. However, the home team still had a few strong shots at taking the game in overtime. After tying the round with 46 seconds left in the 3rd period, Finland managed to score after Canada’s failure to convert on two game-snatching chances in overtime. This ultimately knocked the host team out of the 2019 IIHF World Junior Championship for good.

READ MORE: American Sports Gambler The Most Influential Person Of 2018

CA Captain Maxime Comtois was granted a penalty early in the extra period after local defenseman Evan Bouchard ended up being hooked during a breakaway. However, Comtois, who opted to take the shot by coach Tim Hunter under this year’s new rule set, was cast aside on his attempt at a low block.

Just a couple of shifts later, Canada’s first line center Cody Glass managed a cross-ice pass to Noah Dobson. The Summerside, PEI native was staring face to face with an open net, but on his one touch try at the most inopportune moment, his stick broke, losing him his shot at a final victory.

This shocking turn of events gave Finland the upper hand. Unlike Canada’s many missed chances to snatch the game in their favour, Finnish defenseman Toni Utunen (who is currently a Vancouver Canucks prospect) finished off the opposition team at his future home rink with a blast that sailed over goalie Michael DiPietro’s left shoulder with ease.

Just like that, the Finnish team were suddenly off to the semi-finals. They are set to play against Switzerland on Friday, who managed to achieve a shocker earlier on the day with a 2-0 quarter final victory against Sweden over in Victoria.

When interviewed about Canada’s loss, Comtois simply noted that his team gave it their best, and that sometimes, the bounces don’t move in your favour. Finland may have had a slight edge in this particular game, but both sides had ample opportunities to scoop this one – and the Scandinavian team was foiled by DiPietro many a time, too.

Do YOU love betting on sports? Place your bets at top Canadian sportsbooks online NOW!