Finally I See Light at the End of the Tunnel 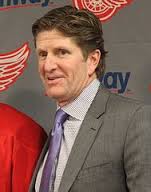 But it's still a very long tunnel! I will talk about how bad the Leafs have been for so long, but I do want to give kudos to first-year president Brendan Shanahan. He inherited a mess and is now cleaning it up.
It's taken me a while to get my head around the stunning news that Mike Babcock is leaving Detroit and coming to Toronto to coach our beloved but intensely dysfunctional Maple Leafs. It was too facile to attribute this decision simply on the extraordinary contract, $50,000,000 spread over eight years. A coach of the caliber of Mike Babcock tends to stay where he's had success or goes to the best fit for himself personally even if best fit offers less money.

So, most people thought that Babcock would either stay in Detroit or would go to Buffalo which reportedly had offered a lot of money as well, albeit less than Toronto offered, but was much further along than the Leafs in becoming not just competitive but challenging for a Stanley Cup.

A Top-to-Bottom Morass of Dysfunction

The Toronto Maple Leafs have been a mess! After they fired Randy Carlyle on January 6th and gave the interim coaching job to Peter Horachek, most observers expected the team to rally and play better. Instead the team played much worse. The Leafs were arguably the worst team in the league from the week before Carlyle was fired, after they had been on a two week winning streak, when they started a prolonged losing streak, interrupted by a very few wins, until the end of the season.

Cleaning Out the Clutter

Few of the players who finished the season with the Leafs deserve to return next season. But no team can perform a 100% house cleaning of players. So Babcock's first task as coach will be to decide which players to bring back for next year. His first challenge is to instill a strong work ethic into his players. At the high professional level of the NHL, the difference between players or teams may be simply how hard the players are willing to work. Once an organization develops a lazy attitude it is enormously hard to eradicate it. Losing becomes a kind of cancer. Radical surgery and intensively intrusive treatment are often the only remedy to save the body.

Hockey is a game in which hard work may go unrecognized by the public. It is never unrecognized by the coach or upper management. Most players on winning teams are average players who contribute to their teams in all the ways that don't appear in the box scores. The Leafs don't have any players whose contributions are invisible to the untrained eye but clearly visible to management. They finished the season near the bottom of the league in goals scored per game, goals allowed per game, power play percentage, and penalty kill percentage. Taken together these stats indicate a lazy, undetermined, uncaring team. So, a massive overhaul is needed and as a result the Maple Leafs will likely not be a very good team for at least a couple of seasons.

What kind of Coach is Mike Babcock?

Mike Babcock will be at the helm of the team during this overhaul. What can long-suffering Leafs fans expect from the first drop of the puck in training camp next season? Toronto fans are no less knowledgeable than Red Wings fans. Toronto fans have had precious little to cheer about for almost fifty years. But many Leafs fans played hockey in their youth and know the game. How will Mike Babcock leave his mark on the emotions of Maple Leafs fans as well as on the team itself from the beginning?

Mike Babcock's image as a coach has always been one of calm determination. He works extraordinarily hard and expects the same from his assistants and players. Babcock has shown in the past that he won't hesitate to sit a player who isn't giving his all. There may be a few waves of personnel changes as Babcock finds out, in some cases quickly and in other cases after perhaps half a season, who are the players who will play every shift and who are the players who simply want to sail through the NHL without an excessive amount of effort. Mike Babcock is the quintessential coach, always looking for small, imperceptible edges with which to win games. The new Leafs will have to follow his lead. Every coach believes in fundamentals but not every coach can get his players to believe in them too.

Here is My Theory

Here is where I focused in trying to ascertain Mike Babcock's motivation for taking on such a huge project.

Briefly stated, Mike Babcock knows that this challenge represents his immortal legacy. If he wins in Toronto, he will go down in history as one of the storied coaches of all time. Babcock certainly wasn't a storied player in his day. In all team sports, the best players often make the worst coaches. The weaker players study the game, first to tweak any edge they can get for themselves to further their playing careers but, then, to begin their training for coaching, realizing, as they do, that they will only make a name for themselves as a coach.

When Mike Babcock was hired as the coach of the Red Wings only ten years ago, he inherited a successful system. He inherited committed players, players who knew how to get deep in the playoffs year after year. Babcock put his personal stamp on the team, to be sure, but the winning core was already there. To some extent, he had only to maintain most of the status quo because the status quo was championship caliber players, work ethic, commitment, and determination.

In Toronto, Babcock will make the team over in his own image. I don't mean to sound Biblical here. I mean that the Toronto Maple Leafs five years hence and beyond will be Mike Babcock's Leafs and no one else's.