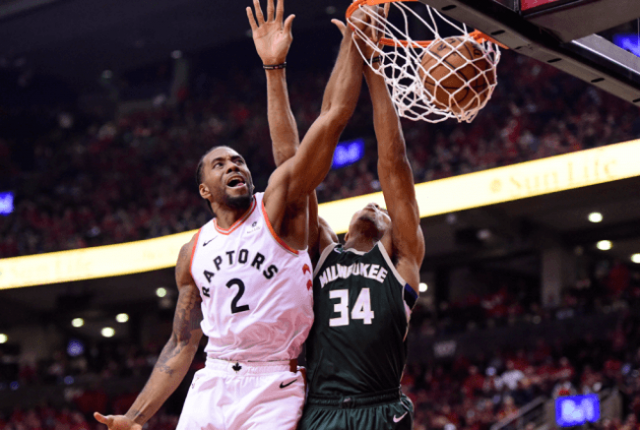 Kawhi eats for free at restaurants in Toronto. And did we mention life-size murals and fans chanting his name in true sportsman celebrity style? And those meals; they happen to be free for life. One cannot help but wonder whether these seemingly desperate; albeit valiant; measures will be enough to keep Kawhi Leonard in camp Raptors.

Perhaps it’s going to turn out to be a thing of mind over matter. Raptors fans want to believe so badly that Kawhi will stick around, that they’re in essence going to make it happen. Talk about the power of thinking on a thing so long and hard that it actually comes to pass.

That old buzzer-beater seemingly did the trick for Mr. Leonard. Nothing says love at first sight quite like a buzzer-beater in basketball’s language of love and be loved. The Toronto Raptors forward did after all prove himself worthy of the deity-style hero-worship that he now finds poised at his golden feet by making the ball to bounce on the side of the rim before beating the buzzer in a slam-dunk smooth Game 7 move. It all led to the Raptors beating the Philadelphia 76ers in a 92-90 victory in the Eastern Conference semi-final, after all. The fact that a second-round loss may have sent him packing appears to now be long forgotten as Raptors fans chant Kahwi’s name to all who have ears, and perhaps even to those who don’t.

But whether the player will actually return the favour is another story altogether. A popular Spurs writer is of the opinion that Kawhi will pack his belongings at any old first-class offer. According to Tom Petrini, he’s seen this all before, and it doesn’t end well. In fact, it ends in San Antonio-style heartbreak.

But for now, its love all around for Raptors fans all over. Another meal, another mural, another song chanted in honour of their hero is never too much to ask. Not if it means that the seemingly inevitable heartbreak hotel trip is postponed for even just one more season.

The fact of the matter is, Kawhi isn’t exactly loyal. San Antonians held on to a similar love affair when Mr. Leonard was theirs to love. And, says Petrini, just look how all of that ended.

Betting on Basketball is as easy as 1,2,3! Place YOUR bets online NOW!