Ethan Bear Commits To The NHL 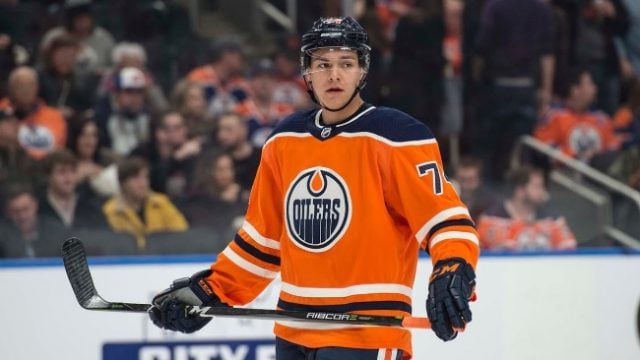 Edmonton Oilers defenseman Ethan Bear knows that change has to come from within; from a personal decision. The 22-year-old recalls a particularly difficult season with American Hockey League team Bakersfield Condors. This was 2018 and a season drenched to the bone in injuries. Ultimately, recalls the Oilers defenceman, only one question remained, did he want to be an AHL player or did he want to be an NHL player? The answer is obvious, but the solution made the journey a tad more complicated.

Even so, says Bear, what ultimately transpired in terms of an important decision made and adhered to, now has him feeling and performing better than ever before. And performing better for the Oilers no less; after it was assumed by him (Bear) that he would in all likelihood never again see the inside of the Oilers’ locking room. He was after all not considered for any one of the Oilers’ 2018/2019 games. A single solitary goal scored for the Condors in all of 33 games did not offer much comfort and made it quite evident as to why the Oilers weren’t as much as glancing in his direction for an entire year.

A Change Of Lifestyle

And so it was decided, recalls Bear, that some important changes were afoot. Lifestyle changes to be exact. Bear says that he eventually realised that without him making the necessary sacrifices on his part, nothing was going to change. He cut out carbohydrates, ate only vegetables and extracted his daily protein intake from grilled steak and chicken. He also started eagerly following LeBron James on social media.

James is famous for his absolute commitment towards fitness and elite sports-star healthy eating practices. On James’ site he learnt a great deal about the finer workings of exercise and nutrition. And what’s more, in addition to his having been re-integrated with his beloved Oilers, Bear says that he’s feeling better and more energised that ever before.

Bear now plays the game of a senior player, one beyond his own years and one who has seen and heard and done a lot. He’s got poise, he’s got top style and he’s fully committed towards keeping it this way. He passes the puck like few before him and he has the type of forward-focused vision that true sportsmen and -women are made of.

And did we mention that Bear is one of the main reasons behind the Oilers now being tied with the St. Louis Blues as the team heads into the Western Conference game against Arizona? Saying anything more than this would be overkill: Bear has fixed what was broken.

Bet on the NHL online. Back YOUR favourites to WIN!