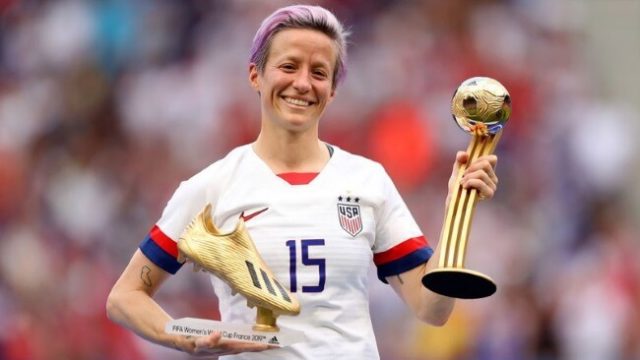 Meet Megan Rapinoe. The woman not afraid to use a Women’s World Cup Final and her own personal recognition as the winner of this year’s Golden Boot award (top scorer) to get a word in edge-wise to draw yet again the attention of the soccer world to the one issue that seems to continue to force the FIFA powers that be into a place of solemn introspection and a whole lot of “conversation” but with no real follow through. We’re referring of course to the ever-widening chasm between what male players earn in prize money vs. what their female counterparts do.

The feisty pink-haired top American scorer during Sunday’s final scored her 6th goal of the FIFA women’s tournament. America beat the Netherlands 2 – 0 in Sunday’s finals. The victory made for the perfect platform for a voice in the wilderness to be heard as Rapinoe brought not only her golden boot A-Game but also her zeal and propensity for fighting for women’s rights in professional sports.

On Boos And A Golden Boot

The fact that Rapinoe was only able to receive the Golden Boot award and scoring trophy after chants and boos from the crowds demanding equal pay for women in sport was most definitely more a victory than an annoyance for the champion star. The boos were after all not directed at Rapinoe but rather at FIFA President Gianni Infantino during his appearance alongside French President Emmanuel Macron; in who Rapinoe, incidentally, discovered a special ally for her worthy cause.

After the boos and chants demanding declared unwavering support of Rapinoe’s equal pay campaign had died down somewhat and the star was eventually able to receive her medal she declared boldly that a little public shaming has never really hurt anyone; with a sideward glance in the direction of a slightly out-of-his-depth Rapinoe.

President Emmanuel Macron, on the other hand, appeared not in the least bit uneasy by the calls for equal pay justice. Macron, if anybody, had his heart not been in the right place; where it obviously is; should have been the one to go around in tight-lipped fashion. It was after all France’s men’s team who last year earned the men’s $38 million prize pot after having lifted the champions’ trophy on high in Moscow. Compare that to the $4 million earned by the American women’s team for beating the Netherlands in the final, and you start to get the picture.

No Thanks To Trump Invite

At least Rapinoe had not gone as far as confronting the FIFA man on the field. Not that she didn’t in all likelihood want to. This is after all the same woman who had rejected a visit with US President Donald J. Trump at the White House following the announcement of the American team’s participation in the FIFA Women’s World Cup final.