Malindi Elmore May Be Headed For Tokyo 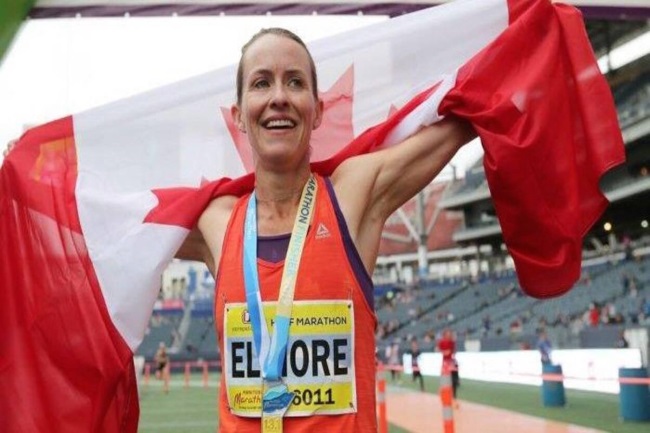 B.C. native Malindi Elmore made her Olympic debut some 16 years ago. The year was 2004 and Elmore had qualified to run the 1,500 at the Olympic Games that was hosted by the city of Athens that year. But Elmore missed qualifying for the semi-finals by a single spot. Disheartened but not completely dissuaded, she then gave it her best shot trying to qualify for the 2008 and 2012 Olympic Games. Sadly, she didn’t make it into either and subsequently decided to lay to rest her Olympic dreams for the sake of her own emotional welfare.

But Sunday’s Canadian women’s marathon proved a date with Olympic destiny as Malindi Elmore; now only 2 months shy of this year turning 40; resolutely crushed the current women’s marathon record. Best of all is that more than celebrating having 16 years later made a come-back in a hugely impressive way, Malindi Elmore may very well have clinched a spot at this year’s Olympic Games in Tokyo; something she says her 24-year-old self would at the time never have imagined to be possible.

It’s hard not to root for Malindi Elmore because hers is a story of determination, resilience and the absolute refusal to give up. It’s also a story of a deep-rooted love of the sport of running; only this time round, she’s managed to complete re-invent herself as a marathon runner. And it’s taken her only a year to do so.

Elmore is happiest of all about the fact that hers appears to be a story that may soon be coming full-circle in Tokyo. The fact that the door didn’t close completely on the world’s most famous games is a real boon to Elmore and a healing process of sorts when thinking back on the many highs and as many lows and heartaches of her younger self’s track career.

Elmore never really quit running or physical training. In 2016, her Arizona-based Iron Man time of 8:57:22 marked the 4th fastest time ever achieved in a triathlon / Iron Man competition by a Canadian athlete. But as it so often does, work and family life happened, and after having launched a successful career as a coach and events planner, as well as having become mom to two boys (aged 1 and 5), Elmore soon discovered that triathlon training was just too taxing on her time.

Never one to give up completely on the running dream, Elmore decided that running a marathon would be a much more time-effective option than training for a triathlon and so it came to be that in 2019, the Canadian star made her marathon debut in Houston.

As for how it felt on Sunday to not only win but also break a record, Elmore recalls having never once doubted that it was going to be a great race. And it was.