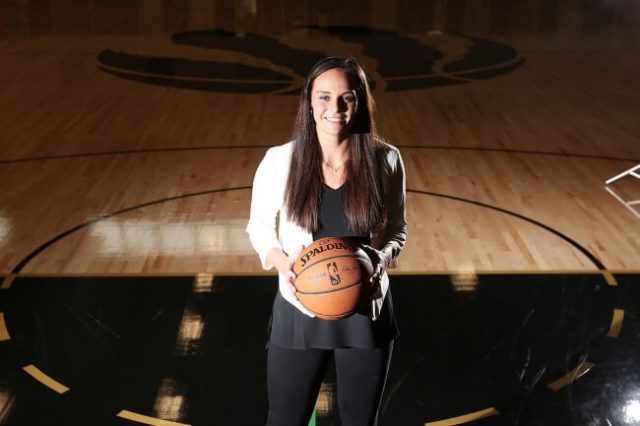 Raptors data analyst Brittni Donaldson has been appointed new assistant coach to head coach Nick Nurse. Donaldson is now officially the 10th female coach assistant appointed by the National Basketball League. And judging by the looks of things, Toronto could not have made a more appropriate appointment.

The 26-year-old has spent the last 2 years in the position of data analyst with the NBA team and was asked earlier this year to bring new acquisition Marc Gasol up to speed upon having first joined Toronto. Looking back now, Gasol was in all likelihood a trial run of sorts in order to ascertain whether or not Donaldson was a fit for the daunting and exciting task now at hand.

But Donaldson isn’t merely a data cruncher. She herself played top-form basketball at university level. In fact, the new assistant Raptors coach still holds the University of Iowa record for the most three-point scores tallied during a single game with eight. Donaldson played four seasons at Iowa University.

Donaldson loves basketball to the point of the game being her life. But even so, it hasn’t always been easy. She has had to face major setbacks due to injuries that ultimately led to 4 separate knee surgeries during her time at college. She describes the last two of the four surgeries as having been exceptionally traumatic.

The surgeries resulted in her having had to spend the bulk of her time on crutches. No weight was to be applied to her knees post-surgery and the side effects of the surgeries included having to learn to walk all over again. Donaldson describes his as having been a truly trying experience, and especially so because not only did she have to re-learn to walk, but she was also suddenly removed from the game that she loved.

Serious About Being A Role Model

As for the actual task at hand, Donaldson considers herself up to the challenge. What she loves most about coaching, said the new Raptors coach during a recent interview, is that she is able to consider everything learnt as a player, and everything learnt and tuned into from her experience as a Raptors data analyst, and combine the two disciplines in her application of coaching.

Donaldson is also well aware than literally thousands of young girls will now be looking up to her as the ultimate female role model in sports. This is a responsibility and a privilege not at all taken lightly, says the new NBA assistant coach.

Find out more about BETTING on NBA games. Sign up at a Canadian sportsbook ONLINE!