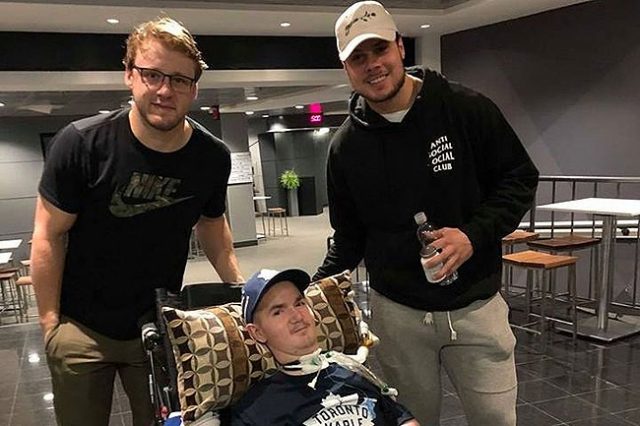 Mick Roberts from Bishop’s Falls in Newfoundland and Labrador finally got the chance to see his beloved Toronto Hockey team, the Maple Leafs, playing live. The weekend of the 6th of October saw him take in the action, and he got to meet his hero Auston Matthews, the star center, as well.

Roberts is a 26-year old man with Duchenne muscular dystrophy. It’s a genetic disorder characterized by a progressive degeneration and weakness of the muscles, and it has left him with very limited mobility and speech.

Roberts has always been a big fan of the Leafs, but his family has simply not been able to afford to take him to a game. Until the beginning of this month that is, when, thanks to the kind help of total strangers, their local community and an organisation supported by the Hockey team, they raised enough money to finally make the trip.

Mary, Mick’s mother, said the opportunity was incredible and that it had been very emotional for her and her son because she knew all too well that he is simply not able to do the things that most of us take for granted. She said that he now had a wonderful memory to draw on, and it’s all thanks to the kindness of a stranger from Perth, Ontario, who set up a GoFundMe account to make her son’s dream come true.

In just 5 days, the $6 000 goal was met and surpassed, and the money was then used by the family to drive to Ontario from Newfoundland.

Roberts was diagnosed at just 3-years old, and muscular dystrophy can see its sufferers becoming very secluded. He needs 24-hour care each day now, and requires a ventilator to help him breathe. His mother has said that watching professional hockey games is a large reason that he is still alive as he absolutely loves seeing the action unfold and rooting for his favorite team.

She said that Roberts called the whole thing unbelievable, and had said that it was amazing how, thanks to the support of people he’s never met, his dream of seeing the Leafs playing a game in Toronto was finally coming true. She added that he couldn’t get over it, and that he’d cried when they told him what had happened. The family got to tour the Scotiabank Arena on the day of the game, met with several players, and then watched as the Leafs took on the Ottawa Senators.

Want to bet on the game? Place your wagers online and see if you can WIN!