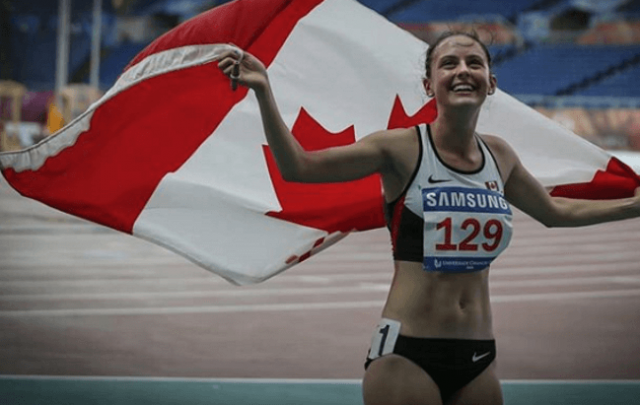 Canadian track and field champion Gabriela DeBues-Stafford isn’t only super fast out of the staring blocks, but she also has what it takes to keep up the pace, and for all of 1,500 metres to boot. The athlete recently ran the distance in Canadian record time at the London-Stadium hosted Muller Anniversary Games Diamond League event. The previous record had been firmly locked into place since 1985 when it was registered by Lynn Kanuka. Stafford’s 4:00.26 only just beat Kanuka’s time of 4:00.27. But a win is a win, even when it’s by 1-100th of a second, and the Canadian runner has a reason to celebrate.

Actually, this is Stafford’s fifth reason to celebrate this year. The London win is Stafford’s 5th Canadian record for 2019 and the year isn’t even near out. Stafford finished in third position overall among a field of 14 participants.

Proof That Hard Work Pays Off

But Stafford says that since she’s working harder than ever, her recent performance is no surprise. The athlete earlier this year relocated to Glasgow in order to be trained by British record-holder Laura Muir as part of Andy Young’s world-famous training program.

Stafford recently told CBC Sports that her workouts had become very intense indeed since having moved to Scotland, and her recently having shaved an average of 5 seconds off in terms of overall performance is considered by her to be direct result of her intense training with Laura and also with 2017 European Junior Champion Jemma Reekie. Stafford said it was simply a case of pushing one’s self to work harder than before when in a situation of being surrounded by other ambitious people.

London Stadium also turned out to be a test of fire of sorts for Andre De Grasse. De Grasse ran the 100-metre race in under 10 seconds for the first time since his return to pro-competition. De Grasse was stopped short in his running tracks when in 2017 he fell victim to Strain 2 injury of the hamstring.

Then in July of last year, De Grasse’s journey must have appeared to the athlete to be stuck on repeat because he ended up injuring the very same hamstring during a championship event in Ottawa.

The repeat injury was a big part of why he was initially afraid to compete at the London event, said De Grasse to a CBC’s Stephanie Jenzer. That, as well as the fact that he had family who were based in London; family who dearly wanted to see him compete for the very first time. Luckily it was yet again a case of all’s well that ends well.

Bet on the BIGGEST sporting events worldwide. Sign up at an online sportsbook!