Congratulations to Canada's Champions and Good Luck to all our Athletes 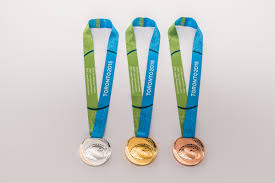 The Canadian teams and players have been performing very well at the Pan Am Games, still underway in Toronto. Our Canadian athletes have already won gold medals and are in strong competition for others.

Tory Nyhaug won the Gold Medal in the Men's BMX. The personal odyssey Tory has travelled is amazing in its own right but for him to be racing at such a high level is nothing short of wondrous! Tory has had his share of major injuries in his short career; he's only 23. Three years ago, at the Olympics in London, he was suffering the after effects of a splenectomy, necessitated by severe internal injuries suffered in a fall, and was eliminated quite early from the competition. To race in this year's Pan Am Games he had to have screws removed from his foot in April. He had carried the screws in his foot since late 2014 when his leg had to be surgically repaired after another severe injury.

What is it about BMX that leads to such career-threatening injuries? BMX is a variation of motocross. The bicycle is low to the ground. In order to minimize wind drag racers wear the minimum protective gear, primarily helmets. The races look like X Game competitions with bikes and racers flying high in the air but, as racers compete directly, with other riders, accidents can and do happen. The racers reach such heights after jumps that only perfect landings prevent spills which could impact most of the other racers in the heat. Spills also occur on the hairpin curves.

They also spend long periods of time under water during a performance. They have to learn to breathe deeply without appearing to do so and to hold their breath whilst under water for many seconds at a stretch. So, although the sport has aesthetic appeal, the greatest amazement I feel when watching the synchronized swimming competitions is how they manage to breathe and hold their breath as they do!

As an aside, may I say that it's a true pleasure for someone who loves words to hear Jaqueline speak so fluently and effortlessly in both (very) Canadian French and Her Majesty's English!

That's the biggest goal of high diving: to land vertically in the pool after all manner of twists and turns in the air, and upon landing, to splash the water as little as possible. Three Canadian divers won medals in the first day of the Pan Am Games.

Roseline Filion won the silver medal in the 10 metre platform dive and teammate Meaghan Benfeito won the bronze. Phillippe Gagne won the bronze in the three-meter springboard. Roseline improved as the competition progressed whilst Meaghan was the point leader for a time before finishing third. Improving under pressure as a competition goes on is a key element in all sports, so Roseline's performance raises Canada’s hopes for an Olympics medal. Meaghan has the talent to compete on a world scale, but needs to learn to subsume the tension within her performance.

Phillippe told reporters that he was extremely pleased with his medal and felt that it would boost his confidence in the run up to the Olympics.

The whole matter of confidence for athletes has always befuddled me; I'll try to put together a blog entry on this subject soon. I've long wondered how a star player in any sport can have a crisis of confidence over a single or even a small string of sub-par performances.

As an example of a player overcoming a bad performance, Corey Crawford, one of my favourite athletes not only because he's a true superstar but because he is so often derided for his performances, overcame a poor showing in the first game against Nashville in the first game of the first series to completely overwhelm Tampa in the Stanley Cup Finals.

Kayak racing may not have been an Olympic sport when Native Canadians roamed our vast land undisturbed by Westerners. But kayak racing surely was a competitive sport on the huge expanses of water. Thus it was appropriate that the first competition of the Pan Am Games would be kayak racing and it was pleasing and deserving that the Canadian women won the gold medal, even if they did beat the team from, of all places, Cuba, by a single second. Emilie Fournel, Hanna Vaughan, KC Fraser, and Michelle Russell won in the four-seat kayak. They will next compete in the World Championships in August. The four women have a good chance to win a place for Canada in the Olympics in Rio next year.

Is it a Waste of Money

Some say paying billions of dollars for facilities to host the Pan Am Games or any large competition is simply a waste of money. Whilst I agree with both left and right that it is a waste of money, I think that it is a good waste of money, similar to spending a lot of money on a good restaurant meal or on a high class hotel once in a while! I will try to write something on this subject, too, in the near future.

SHARE
Facebook
Twitter
Previous article More Space on the Ice Will Make the NHL Better
Next article Look Out! Climate Change to Wreak Havoc on Sports in Canada
Related Articles