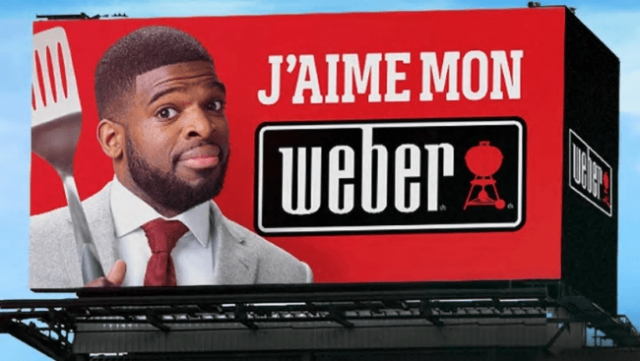 Downtown Montreal is abuzz with speculation after a life-sized billboard advertising Weber Grills at the Ville-Marie Expressway appeared to have sprung up out of nowhere. The billboard forms part of Weber’s latest Quebec campaign, and had it not been for the identity of the famous personality boldly declaring his love for his Weber in the advertisement, the billboard may not have attracted even a 10th of the attention that it has.

Which, as it turns out, is exactly why clever marketing is such a boost to sales. And who more likely to turn a couple of heads than former Habs Defenceman P.K. Subban? Especially when it’s the very same Subban who, in 2016, was traded out by his home-team for current Habs Captain Shea Weber.

It’s the kind of brilliant marketing gimmick that prompts people to jump brands.

But, incredible as though it may sound, Weber’s VP for marketing, Patricia Larez, denies that the analogy has anything to do with the trade. Larez said that the Subban’s trade did not have nearly as much to do with the advertisement as his love for grills and his love for the city of Montreal.

She also stressed the fact that despite the reactions and averments on social media, there was indeed no bad blood or any controversial connection to Subban’s trade. So prominent is the connection that the only indication that Weber may have innocently overlooked the uncanny word play, is the fact that Subban agreed to appear in the add.

Assuming of course that Subban, who now plays for the Nashville Predators, wasn’t merely hoping to get his own back by directing a good old stab at Habs fans. Conveniently, Subban has a handy excuse for not yet having commented on the campaign, what with his team currently competing in the first round of the Stanley Cup playoffs.

Weber Sticks To Its Story

According to Weber, the ad is the brainchild of Gendron Communication, a media agency based in Quebec. The famous grill manufacturer however insists that the connection is purely incidental and that Subban’s involvement is nothing more than making use of a recognisable face in order to advertise a product.

Weber may be sticking to its story, but Montreal-based fans aren’t fooled. Irrespective of the true motivation behind the ad, hardly anyone watching the playoffs will be able to resist the temptation of sparing a thought for Canada’s favourite grill.