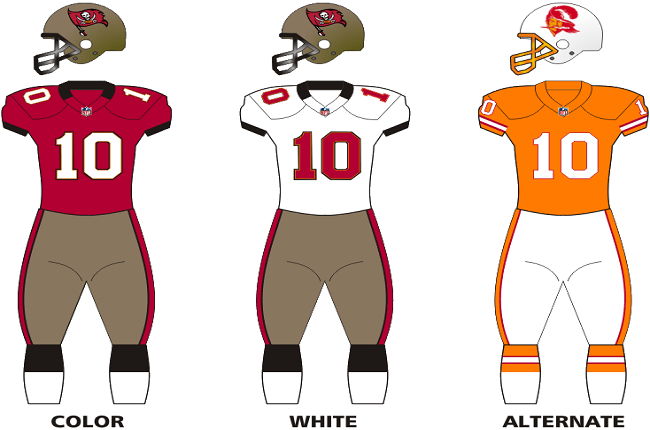 Tom Brady won’t be resembling orange creamy puff pies during his debut season with the Tampa Bay Buccaneers. The Bucs revealed their new attire on Tuesday, and fans no doubt let out a collective sigh of relief that the franchise won’t be adorning a look largely associated with poor karma, bad blood and a generally very ill fate once the team gets to head into a brand spanking new season. The look draws on the power of the team’s most successful era ever played, including the colours worn by its Super Bowl XXXVII super title squad, and is according to the franchise, the result of copious amounts of valuable feedback received from Bucs fans.

And in a way, the new colours of darker hues of reds and greys and pewter offset by white represents the team’s glory years. But there are also some pronounced differences between the new attire and that worn during the brand’s Super Bowl heyday. The style, for one, is sleeker. The jersey as well as the pants feature less sheen that the previous victory-version. The uniforms no longer have only two combinations of colour, but three. Red, white and all-pewter (for Color Rush games) are the new now for the Bucs. Color Rush games were previously typified by an all-red almost costumed attire.

And it’s a thing of excitement to be reminded of a special Super Bowl era in the history of the Bucs, said franchise owner and co-chairman Ed Glazer of the new uniforms. The idea was to create a dynamic new look for Color Rush games and sleek and sure definitely embodies the new style in a fairly dramatic way. The idea was to allow the past to overlap with what is expected of a bright new future, said Glazer, and one that will hopefully resonate with Bucs fans far and wide.

The pre-Brady redesign is only the 4th change the Bucs have implemented since the team’s inception some 43 years ago in 1976. The last time any new look beckoned on the horizon was back in 2014. The only major change at the time was the inclusion of the much-despised digital clock on the jerseys. Fans have since ensured that the clock die a not-sudden-enough death.

But according to Bucs tight end Cameron Brate, most players were perfectly at peace with the old uniform, pesky clock included. It wasn’t as if anyone straight-out hated the old uniform, explained Brate, only that even the players like the new uniform a whole lot more. Brate describes the new fit and colours as “awesome”, saying that he’s personally a huge fan of the white and the all-pewter looks.

The Bucs have not reached the playoffs since 2007. And so, a new beginning is very much long overdue. The clothes may not maketh the man, but the new colours will hopefully at least to some extent help usher in a new era for the franchise. And at least they’ll have Tom Brady too. Which helps.

What are the new Tampa Bay Buccaneers kit colours?

How did the Bucs decide on the new colours?

They considered input from fans.

How many times have the Bucs changed their kit colours?

4 times since the team was established in 1976.

When was the last Bucs kit change?

Get ready to bet on NFL games online. Sign up at a sportsbook TODAY!