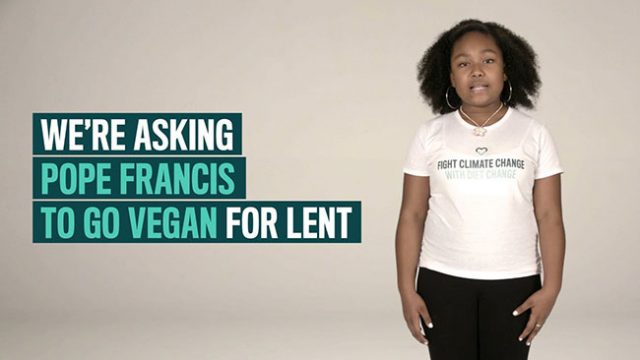 Celebrity watch is real. And let’s face it, very few of us can lay claim to being completely immune against a healthy dose of being star-struck, if only every once in a while.  And whilst it may be true that celebrities choose to endorse certain products or foods in return for monetary enrichment in the way of partnerships, many claim to prefer to back projects and products that they themselves are passionate about in real life.

Whatever the reasoning behind any motion, an increasing number of celebrities are throwing their weight behind the fight against climate change, and a large number of people consisting mainly of the rich and famous are reaching out and appealing to all who have ears to listen, regardless of race or origin. It’s becoming a large-scale outreach that seeks to appeal to our shared humanity.

A Letter To The Pope

As recently as last week, in a large-scale attempt to raise awareness concerning the giant-sized footprint left behind by the global meat production industry, a number of big-time names the likes of Sir Paul McCartney, Woody Harrelson and Joaquin Phoenix, co-signed a written challenge issued by 12-year old Genesis Butler. The challenge was addressed by way of a letter of correspondence to Pope Francis, the holy custodian of the Catholic Church.

If the Pope were to accept the challenge, he would be required to go completely Vegan for the duration of Lent. In return, the celebrity co-signees have pledged to donate an impressive USD$1 million to a charity of the Pope’s choice. The Pope is arguably one of the best-known world figures alive today, and having his support on board will go a long way towards inspiring many others across the globe to eat clean too.

What’s more, doing something for the no-hidden-agenda love of charity won’t exactly hurt the Catholic Church at this stage of the game either. It may serve the purpose of redeeming the intentions of the church, at least to an extent, following the miry waters of sexual-abuse allegations that the Vatican has had to navigate over the past couple of years.

But whether or not the Pope is up for the challenge of going completely animal-product-free for an extended period of time, the campaign will surely have done its bit in order to raise awareness about the fact that the farming of livestock contributes an estimated 18% of all carbon emissions across the globe.

This estimate was recently released by the Food and Agriculture Organisation of the UN, and truly is a major cause for concern. Whilst people won’t kick their meat-eating habits altogether, celebrity-backed campaigns such as this one will hopefully go some ways towards inspiring people to think before they purchase meat-based products. This will hopefully lead to a decline, as well as act as an inspiration for the development of more sophisticated and diverse plant-based products.

Looking for the best novelty bets?
Place your wagers online and see if you can back a WINNER!