Canadian Scientists Say the ‘The Blob’ is Back 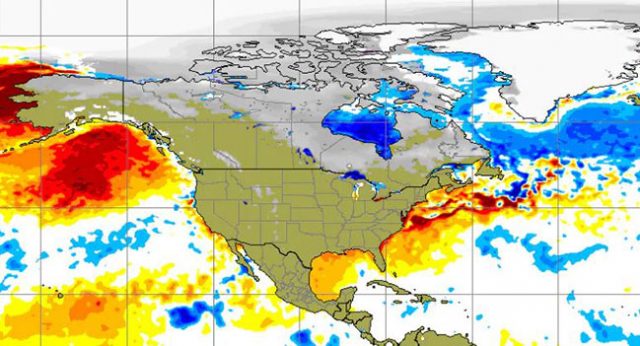 According to expert meteorologists, unseasonably warm conditions in British Columbia are once again heating up an area of the Pacific Ocean, recreating a phenomenon that has over the years become known as simply ‘the blob’.

The mass of warm waters has been blamed for hotter weather on land, not to mention unfavorable feeding conditions for local salmon, and even an influx of dead whales and other sea creatures.

Now, Environment and Climate Change Canada spokesman Armel Castellan says that it seems as though a warm water spot called the ‘son of the blob’ is also appearing off the British Columbian coastline.  According to Castellan, this new blob is a surprising occurrence, especially at this time of year.

The expert says that it comes as a clear sign of the enduring, stagnant weather that the region has been experiencing over the past four years. Unusually warm, summer-like weather patterns in central and northern BC are being blamed on worrying droughts in vast patches of the Canadian province. Castellan says that the newest emergence of another blob in the Pacific is likely connected to the patterns responsible for the droughts.

He also added that the conditions to form a blob occur when weather systems are often unstable and unchanging. A lack of rain and wind over the ocean means that the waters are not mixed well enough, so the water closer to the surface heats up more than it should, stays where it is, and stays hot as it cannot mix with deeper and cooler waters.

The effects of the blob – or its smaller counterpart – are not yet fully understood, Castellan said. However, many scientists have blamed the phenomenon for a slew of ‘environmental irregularities’. With that said, relief might be close at hand, as the storms are expected to begin as early as later this month and will allow the warm and cool waters to start mixing.

He added that the warmer patches of water are becoming fairly common, noting that it is definitely something that scientists are beginning to see with the resilient ridges. According to him, the phenomenon does beg the question of how much of the occurrence is linked to climate change, while other scientists are firmly convinced that they are one and the same.

In the meantime, politicians across Canada – and indeed, across the globe – are being evermore pressured into taking steps to protect the world’s precious ecological systems. Should they fail to do so, climatologists warn, disaster might be just around the corner.

Are you ready to be a winner?
Play online casino games and hit the JACKPOT!