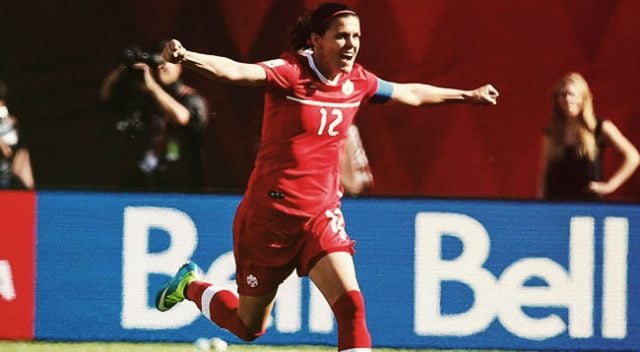 Christine Sinclair, the soccer star from Canada, is 1 of 15 players in the running for the first women’s Ballon d’Or. France Football magazine is launching the individual award this year to a female player and a male player, and the inaugural event is set to take place on the 3rd of December 2018.

Other nominees include Pernille Harder, Amandine Henryki and Fran Kirby.

Sinclair Almost at a World Record

Sinclair is 2nd only to Abby Wambach, the retired player from the USA, in terms of international goals, with a total of 173 to her name. The No.12 needs just 12 more to create a new world record for the most international goals scored by a female soccer player. Interestingly, Wambach sees Sinclair as the finest and most underrated player in the world.

Sinclair is something to behold on the field, and although she’s a Forward for the Canadian team, she often plays like a midfielder, moving the ball in the direction of the opposition’s goal. She’s been in the game since she was 16-years old, when she made her international debut at the Algarve Cup.

On the male players’ side, Kylian Mbappe and Luka Modric might break the stranglehold Cristiano Ronaldo and Lionel Messi have had on the Ballon d’Or for the past 10 years. The World Cup champion, Modric, and finalist, Mbappe, have been nominated for this year’s award.

Ronaldo and Messi have not been as dominant this year, which means a new winner may well be announced. Mbappe won the World Cup for the French team in Russia, becoming the first teen to score in a final match since Pele did so back in 1958. Modric, who played for Croatia, was voted player of the tournament.

Modric won FIFA’s Best Player award last month, and he is considered to be in the lead in terms of the Ballon d’Or. Alongside his work in guiding the Croats through to the World Cup Final, Modric additionally won the Champions League, playing with Real Madrid.

Neymar, Sergio Aguero and Mohamed Salah are a few of the other players in the running, and soccer fans are eagerly waiting to see which male and female players will claim this year’s trophies.

Want to place your bets NOW? Bet on soccer online!