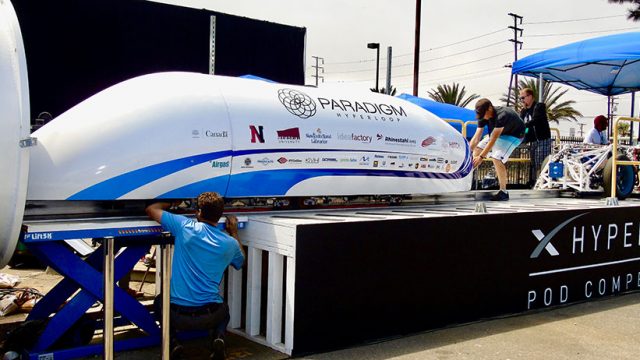 Hyperloop technology has been a hot but also very controversial topic of debate for quite some time. Tech-companies have been running the race with vigour, hoping to be the first to come up with the technology needed to fine-tune the high-speed travel process that supposedly falls somewhere between travelling by car and travelling by plane.

Newfoundland tech-transport company Paradigm now claims to have tweaked the concept to such an extent that a trip from Montreal to Toronto would take no more than 45 minutes, which really is quite a mind-blowing thought. If Paradigm’s concept passes all of the rigorous safety checks required to eventually be cleared by Canada’s Department of Transport; which the company admits is quite some time and effort away yet; folks living in Montreal would literally be able to work in Toronto, and vice versa, no problem whatsoever. In short, if successful, Paradigm will have forever changed the way we do local cross-country travel.

Read More… Breakdancing & 3 Other Sports Get Olympic Go Ahead

More Runners In The Race

Paradigm is obviously not the only company to have experimented with the concept. Many others have been attempting to come up with a fail-safe concept, including a company by the name of Transpod. When Canada’s Transport Department recently announced a tender process that invited interested parties to submit their own ideas about hyperloop technology, Transpod was one of the first companies to welcome the department’s decision.

Co-founder Sebastien Gendron had at the time been one of the first people to comment on the tender and said that up until recently, a certain hesitancy had prevailed in Canadian top-government circles whenever the topic of hyperloop technology came up. The tender, said Gendron at the time, indicated that an important mind-shift had taken place regarding government’s willingness to venture into the hi-tech world of the unknown.

Paradigm May Have The Answers

The department had at the time emphasised that any technology of this nature would have to strictly comply with safety and cost-of-travel standards. Two important questions were regarded as critical:

Of all of the research conducted on the topic of hyperloop travel so far, Paradigm appears to be the company to have come closest to answering the questions as well as various other concerns in a positively constructive and practical manner. The company recently revealed that since having commenced its research into hyperloop travel a number of years ago; it has assumed and abandoned various ideas.

At the beginning of this year, however, it finally came up with the concept it now considers to be the one to meet all of government and world-travel’s safety criteria. Instead of making use of an airlift system in order to propel the passenger pods through the tubes, Paradigm has been experimenting with a high-velocity electrical motor, which they now officially consider to be idea that will eventually become the real deal.

Much will have to be done in the way of fine-tuning the concept yet but for now their idea is considered to be a very good starting point. Not much has yet been revealed regarding the costs involved with the travel of the future.