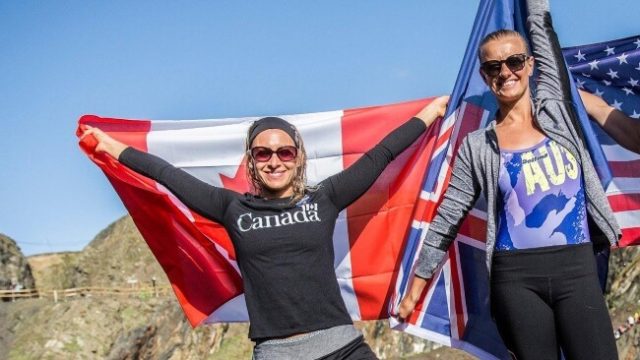 Returning to competitive cliff diving after a prolonged recovery necessitated by an injury is a harrowing mental challenge. These are the words of Montreal professional cliff diver Lysanne Richard, after having won bronze in the women’s 21-metre event at the recent Cliff Diving World Series that was hosted in Mostar.

Richard (37) is a mother of three and put up a stellar performance in Mostar despite her having had to sit out of the FINA World Championships earlier this month due to an injury. Richard in 2017 had been forced to miss out on the entire season due to a similar neck injury. The most recent injury had allowed the athlete to participate in regular training only, making the recent bronze performance all the more awesome an achievement.

A Battle Of The Mind

But Richard, obviously in the habit of self-imposing high standards on personal performances, wasn’t completely satisfied with her overall performance. She appears to have been reasonable satisfied with her 1st and 4th dives, but after the event described numbers 2 and 3 as having been, in her opinion, very much below par.

Richard is quick to admit that participating in the World Series had been presented her with a daunting mental challenge. She had eventually resorted towards visualisation and other creative techniques as alternatives to actual physical training. The lack of actual training proved to be a truly tricky mental challenge to overcome, says Richard.

But despite the circumstances and what with her not having been able to train much ahead of the event, she was satisfied with how the event and turned out and said that the event had actually gone well for her.

This year’s victory belongs to Aussie Rhiannan Ifflan. Ifflan remained undefeated throughout the entire season and managed to capture gold medal number 6 at the World Series. The Australian cliff diver is as three-time World Series champion diver and also happens to be the current reigning champion.

Ifflan’s recent gold medal performance also ensured that she was able to lay claim to the season title. This will serve the Aussie in many ways heading into the final September 14 event that will be battled out in Bilbao in Spain.

Bet on swimming and more ONLINE! Sign up at a Canadian sportsbook.