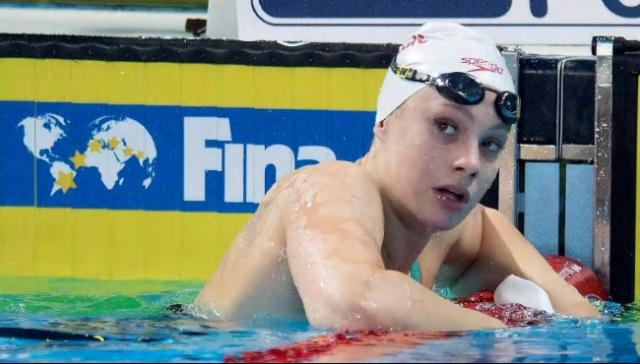 Toronto teen Penny Oleksiak is looking for two things at the upcoming world aquatics championships (WAC). Speed, of course, is one of her goals, but Oleksiak is also hoping to find elements in her races that need attention ahead of the 2020 Summer Olympics in Tokyo.

If this happens, the aquatics champion will know where she can find more speed to improve her performance. Talking to The Canadian Press, Oleksiak noted that she wants to enjoy herself this summer and come as close to her personal bests as possible – but if she can pinpoint some areas she needs to fix, then she knows that she will be even better when heading into the Olympics.

The talented teenager also added in the same interview that she hopes that she comes out of the World Championships looking at videos and noticing many areas of improvement on her starts, turns, and everything else too. This, she says, is how she will move forward before 2020 swings around.

Oleksiak Looks to Improve Her Game

The 19 year old swimmer, who is also the winner of Olympic gold and silver at the 2016 Summer Games in Rio de Janeiro, is leading a powerhouse women’s swim team into the world aquatic championship. The event will be kicking off this month in Gwangju, South Korea, and includes a plethora of diving, swimming, water polo, artistic swimming and high diving contests spanning 17 days in total.

Canada will be sending forth 31 swimmers, 10 divers, two high divers, a women’s water polo team, and an artistic swim team to the Korean city this coming Friday. The water polo team specifically is ranked as the eighth best in the world, while Canada ranks 11th (all time) among countries in medals won at the world championships with 111 in total, including 21 golds.

Jennifer Abel will soon be given the opportunity to set all new records in both springboard and synchronized springboard, while world champ backstroker Kylie Masse and eight-time Commonwealth Games medal winner Taylor Ruck join Oleksiak in Canada’s formidable team.

Canadians Set to Steal the Show

Oleksiak was the swimmer who claimed gold in the 100-meter freestyle and silver in the 100-meter butterfly in Rio three years ago. She and Ruck, both of whom were 16 at the time, helped Canada to victory by winning a duo of relay freestyle bronze medals, making Oleksiak the first Canadian to ever win four different medals at a single edition of the Summer Games.

It was Oleksiak who finished just off the podium at the 2017 world champs in Budapest as well, coming fourth in the 100-meter butterfly, fifth in the 50-meter fly, and seventh in the 100-meter freestyle. And although she admits that she became very hard on herself after that Olympic performance, the star is now ready to go to the worlds, have plenty of fun, and see what she still has to work on before the 2020 Olympics roll around.

Want to bet on swimming? Put money on the BIGGEST events online.